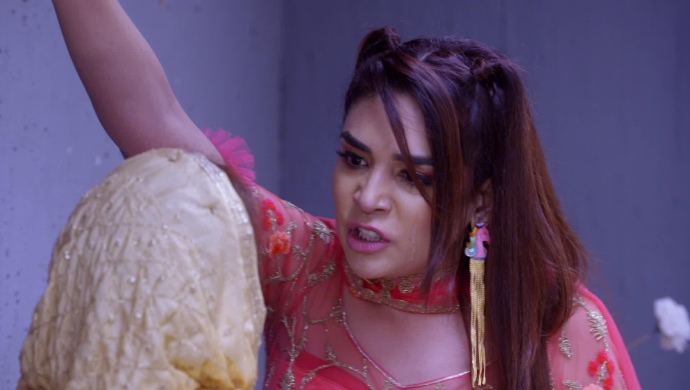 This is Fate 8 September 2020 Update starts as Shrishti is waiting for Samer, he does not show up, she really gets angry and is about to leave when he comes in saying that she must sit and he has something important to talk of, he explains that he came to know that Maira wants to marry Karan, she explains that it will not happen as any sane girl cannot marry someone who is already married, they are talking she says that they both can just make them realize but cannot force them into doing anything. Samer says that he is really tensed as Karan fed Maira by himself.

Rakhi enters the house, she sees Karan coming, they both hug her, and then she also greeted by Rishab, Maira and Kartika, they all are really happy to meet, Karan sits in the foots of Rakhi massaging her legs, She asks Maira to never tell anyone how Karan really is as it might harm his reputation, she sends both Karan and Rishab to focus on their work as it is more important than her. Shrishti is not able to believe it, she says that he even got into an affair with someone else, she says that it cannot be the case.

Samer mentions that it was because she burned her hands, he explains that he would marry her as he cannot break anyone, he explains that they all want that both Karan and Preeta move on but they are not which means that they are still in love. He also mentions that he feels Preeta is more mature but still they all are entertaining Prithvi, he might have loved but now his motive is to take revenge from Karan.

Shrishti also agrees with Samer, she asks if Samer has a plan to diminish the differences that are between them both, he devises a plan that they can introduce some girls who will flirt with Karan which will make Preeta jealous and she might fight with them, she also has a plan but they decide to make them both meet the next day at 11:00 clock at the cricket ground.

Bee ji complains Sarla how she can fall ill. She had been waiting for Sarla to come and inquire about her. Sarla says even Prithvi came in the morning. She sits up and tells Bee ji she is fine. Preeta comes there. Sarla asks why she didn’t go for her job. They convince Preeta that Sarla is now fine, she must leave now.

Rakhi comes home and greet Dadi and Kareena. Kareena apologizes for disturbing Rakhi’s visit to her Maasi. Rakhi asks Kareena what she wanted to discuss with her. Kareena speaks to Rakhi about Karan’s second marriage. Rakhi says the matter ended when Karan denied marrying any other girl. Rakhi feels Kareena is forcing her for the second marriage of Karan. She clarifies that they shouldn’t even speak to Karan about second marriage. She can’t force her son Karan into another mess. They will spoil Karan’s life this way. Dadi seconds Kareena this time and asserts this time Rakhi must speak to Karna and speak about second marriage.

Prithvi was still outside Preeta’s house. He decides to stay here so that he can keep an eye over Karan. If Karan visits, he will understand he is still behind Preeta. Preeta spots Prithvi with the car. Prithvi explains his car went out of order, then inquires Preeta where she is going. Preeta replies she is going Bandra East. Prithvi offers to drop her. Preeta was reluctant. Prithvi insists he isn’t any stranger, secondly he won’t leave her in the middle of any path. Preeta says Prithvi had a lunch with his mother. Prithvi replies it was postponed. Preeta finally sits in the car. Prithvi thinks now he will Preeta like Karan did.

Karan was in the team room, preparing for match practice. Their company’s captain was staring outside the window and says he has seen an extremely pretty girl outside. She is simple yet pretty. Preeta had come into the corridor. Karan joins the captain to see who it is. Preeta turns the other direction and was not recognized. Karan goes inside to take the kit. The captain says Karan must go as opening batsman, only then he will be able to get time and runs both. Preeta had decided to meet chairman first. She still stood behind Karan.

Rakhi comes to Mahesh’s room. She cries that she has been defeated. This time, it feels everyone is forcing her to take a wrong decision. Sherlin reaches the room door and wonders why Rakhi came back. Rakhi asks Mahesh to wake up now, she is indecisive if she should talk to Karan or not. Sherlin gets a cough. Rakhi invites her inside. Rishab comes from behind and was concerned about her tears. He assures Rakhi that Mahesh will soon be fine.

Rakhi tells Rishab that Kareena and Dadi wish they speak to Karan about a second marriage. Rishab says he will speak to them, they are aware of Karan’s decision already. He sends Sherlin to bring water for his mother, then assures Rakhi that everything will be fine.In the wardrobe, Sherlin wonders if Rishab is looking for locker’s keys. She asks if he needs something. Rishab says he was looking for a file, may be its in study.

Sherlin speaks to Rishab that they must speak to Karan. Rishab can discuss with Karan that he must convince Karan to move on in life. Rishab was quizzical if she still has a problem with Preeta. Sherlin insists that Preeta is responsible for Mahesh’s condition, and for Karan’s problems as well. Rishab shouts if Sherlin has lost her mind, she blames Preeta for everything.

When Mahesh had accident, it was because of Sherlin. Even in hospital, Sherlin blamed Preeta while Mahesh named Prithvi when he woke up. Karan broke up with Preeta because he wanted to stop their marriage. He requests Sherlin angrily not to drag Preeta’s name in any of the matters again. She shouldn’t ignite this plan of Karan’s second marriage.

Rishab warns Sherlin to not move forward with Karan’s second marriage as he is already married to Preeta, he explains that he notices each and every small detail which no one else cares about, he also mentions that he knows what she has done in her past, he leaves the room, Sherlin starts to weep at his reaction.The chairman welcomes Preeta. The captain also comes to the room. The chairman introduces her as the physiotherapist, and a very brave girl who fought the terrorists on her own. Preeta was gratified and apologizes for being late on first day. The chairman sends her to the office with a smile.

In the car, Prithvi wonders why Preeta went to cricket ground. It’s not her office. If she went to meet Karan there, but when she would go there. He gets a call from Sherlin who was furious over Rishab’s words. She says she only heard him so that their mission can be accomplished. Prithvi was also irked at Rishab….. he assures her to not worry as now he will make sure that Rishab apologizes to her, he explains that she is like a lion and they do not cry, he calms her down, Prithvi wonders what he will do to Rishab.

Shiv, the captain comes to Preeta’s cabin. He tells Preeta the old physiotherapist was his friend, he is used to coming in this cabin which he must give up. He introduces herself to Preeta and leaves. Preeta thinks had she not met Luthras her life must have been a little different today. Outside, he meets Karan and says he went to the physiotherapist. She is married, still he can wait. Karan wished to meet the girl Shiv had lost his heart for. They reach the physiotherapist office.

Karan was startled to know she is their new physiotherapist. Karan and Preeta were shocked to face each other. Shiv tells Preeta this is Karan Luthra, he got a huge fan following. Preeta apologizes that she doesn’t follow cricket and doesn’t know him. Karan asks, Preeta Arora are you married? Shiv just said so. Preeta’s phone bell rings. Karan tells Shiv to forget this girl, she is married. There is no issue in her marriage. Shiv asks if Karan knows her.

Karan says he is her husband…. husband’s friend. She is showing him attitude because she had a fight with her husband. Preeta asks the guys if they have something to say. Karan tells Shiv to leave, he needs to talk to Preeta. He dislikes Shiv bidding her a bye. Karan now walks close to Preeta and asks what she is doing here. Preeta says she has started a job here. Karan minds, he is The Karan Luthra. It’s his club, Preeta must leave this office. Preeta asserts Karan must leave her cabin, it’s hers. She had just pushed Karan when the chairman comes in. Karan poses to be in pain and getting a massage.

The chairman asks Karan if he has a pain in his heart. Preeta says there can’t be any pain in his heart, he doesn’t own any. The chairman tells Preeta to go through a file of player’s history, so that she can handle any injury in the ground. He makes Karan easy on the chair and tells Preeta to continue with her therapy, meanwhile he can complete his talk. Preeta continues to rub Karan’s shoulder muscles. Karan shouts. The chairman was concerned.

Preeta says it’s done sir. Karan leaves the room. The chairman says Karan is the best player of their team. Preeta murmurs he is the best player of the world. Chairman’s jokes explaining that he is now more focused in his personal life, he only wishes that Karan is able to sort them really soon. Sanjana is having tea with Karina explaining that they all really missing her and she should come back to the club, Karina also agrees that she will come really soon as Rakhi has come back so she will take care of everything.

This is Fate 8 September 2020 Update end as Sherlin also enters the room Sanjana explains that she came to meet her as she had seen something really awful at Karwa Chow, she kept the fast for Rishab but she took the first bite from Prithvi.