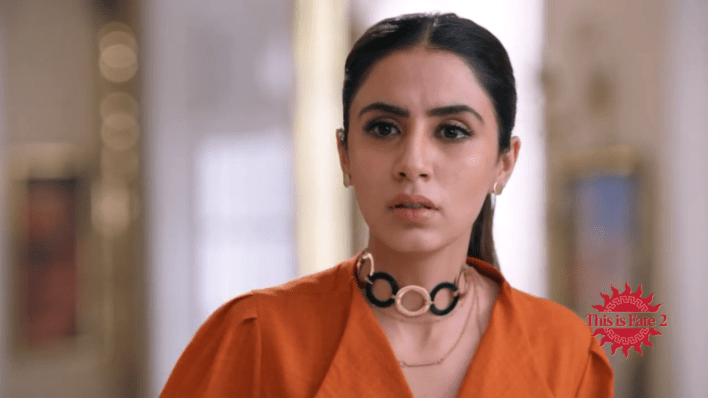 Kundali Bhagya 30th October 2020 Update starts with Nimi telling Karan to come out of the veil. Karan removes the veil from Preeta’s face as well. Everyone claps for the couple. Nimi compliments Preeta and tells Karan he is lucky to have her. Karan boasts about himself. Rishab says both are lucky to have each other in their lives. The ladies tell Karan that Preeta is his companion for the rest of his life, she will make everyday a new one for him. The guests were all headed towards the ring finding ritual.

Sherlin and Kritika set the bowl of milk. Kritika assures they will have to strive hard to find the ring. Karan happily sits with Preeta. Everyone goes on Karan’s side to support him. Rishab and Sameer goes to sit in Preeta’s team.

Sherlin whispers to her mother about her plan. Her mother says she will fulfil her promise, and her guests will be here in a while.
Shrishti excitedly brings the phone to Sarla and Janki awaiting Sameer’s live video call from the ritual.

The ladies instruct the couple about the ring ritual and its rules. The one who wins will rule their spouse for the rest of their lives.

Sameer makes the video call. Shrishti was excited and thanks Sameer for this call. The game begins. Sameer cheers for Preeta. Karina was irked at this. Karan and Preeta enjoy the game. Preeta announces she got the ring. Karan objects that she held his hand. Both pull their hands out at the same time. Dadi announces they will play the game again. Once again, Preeta wins the game and takes the ring. Karan was offensive and his team makes faces. Karan challenges to play game of his choice and sends Giresh to bring the ball.

Karan and Preeta stood face to face. Karan tosses the football. He says they have to take this game to the other corner without touching it. Janki was worried how she will play. Kritika says the music will play and the game will continue. Both will have to balance the ball till the game goes on. Shrishti was sure Preeta will play this game well. Preeta and Karan balances the ball between them.

Preeta was about to slip but Karan holds her. Karan teases Preeta by pulling himself behind, but Preeta efficiently moves herself closer to tighten the grip. Both share a romantic stare. Preeta finally wins again. Rishab hugs Karan while all laughing together. Preeta’s family was happy. The call was cut. Sarla tells her to let Sameer enjoy the function, they have seen enough of the video.

Karan blames that Preeta is a cheater. Preeta asks him to prove it. She says ball still belongs to Karan and goes to pick it up. Mahira stood there with her wrist bleeding with a cut. They were shocked to see her. She weakly walks inside and tells the guests she is Karan’s wife. She rubs her blood in her hairline and says this is named for Karan no matter he accepts it or not. She faints. Karan holds her in his arms. Rishab tells him to pick her up and take her to hospital. Karina calls Ramoona to reach hospital.

Preeta remembers Mahira’s threat that she will attack at the time when Preeta’s life is filled with laughter.

Dadi and Karina discuss that whatever Mahira did is wrong. Preeta had also reached the hospital behind Luthras. Karan was tensed. Rishab notices Rakhi was unstable and goes to call any doctor for emergency. A nurse tells the family that Mahira is critical as the cut is deep. Karina asks him to save her. The nurse says her life is endangered if she is not conscious within an hour. Rishab comes there and asks what he said.

Karina says Mahira is critical. Dadi asks Rishab where he was. Rishab says mom was a little ill. Karan was tensed and runs there. Rishab says she is normal, it is just that Rakhi was uneasy because of Mahira.

Shrishti was setting her wardrobe. She receives the call from Sameer and says she awaited his video call. Sameer tells Shrishti that the function was left incomplete. He says they are in hospital.

Kundali Bhagya 30th October 2020 Update ends as Mahira came there after a suicide attempt, she cut the veins of her arm. She ruined everything. He can sense a negative vibe for Karan and Preeta as well.  Shrishti says she will just come to hospital and leaves without telling Sarla and Janki.