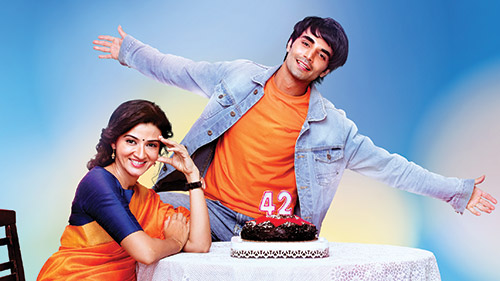 Age is Just a Number 7th October 2020 Update starts with Both Sahil and Pankti playing with Virat, Vaidika comes to snatch Virat and says she now understands Pankti gave her sleeping pills to steal her children and husband. She blames that Pankti forced her to forgive Sahil but her real intentions are false. She blames that Pankti stayed her only because she wants a husband like Sahil; she confessed herself a while ago. She accuses Pankti’s intentions of becoming second woman in Sahil’s life. Sahil asks Vaidika if she is blaming him for this illegitimate relation as well.

Vaidika blames that Pankti is a second woman, she is trying to snatch her husband and children and breaking her marriage; what to call a woman who establishes illegitimate relation to someone else’s husband. Sahil lost his temper over her screaming and raised his hand. The three of them were shocked.

Sahil realizes at once, he apologizes her at once and explains he can never think of doing so. Vaidika says a man doesn’t hurt anyone repeatedly if he loves the person. If Sahil wish to save this marriage; first there were mention of age difference, then the illegitimate relation between him and Pankti and today… This marriage has ended for her today, they must only remain the parents to their children. She requests him not to follow her anymore.

Vaidika cries in the corridor to her room, while Sahil stood there in the hall, stunned. He then moves towards the wall and hurts his knuckles punching it. She was distressed that he destroyed his own love with his hands. Pankti wonders why everything is being spoilt between them, if she is the reason of this tension she must resolve it as well.

Vaidika was in the hall upset about her falling relationship. A postman brings her a flower bouquet and a card from Sahil Agarwal. Vaidika cries while reading the car of Valentine’s Day. She recalls Sahil’s recent stances against him and leaves the bouquet and card right on the table.

Prachi and Puneesh watched her, Prachi was appreciative of Puneesh’s ideas. Sahil and Vaidika have come to physical harassment. Puneesh tells Prachi that he will compel Sahil to push this Vaidika out of this house, like they did him. Prachi confirms if they are doing this for their child to be? Puneesh says obviously, it’s for their unborn child. He throws the bouquet away.

Nani stops Pankti and snatches a list of marriage proposals in her hand. She cheers watching the list and prays Pankti gets a proposal right away, then calls everyone to gather around. She informs Deepak and Bari Amma about Pankti’s intentions as well. Sahil asks Pankti if this decision is because of what happened last night.

Pankti says this is the right decision, even for her own decision as well. She has already been accused and blamed by society, but she must move on in life. She didn’t want to share this news with anyone, but it’s fine. People hold a false perception that she is behind Sahil, but she isn’t interested in someone else’s husband.

Bari Amma tells Sahil not to intervene in Pankti’s decisions, and tells Pankti they will marry her from their own house. Prachi thinks this might spoil Puneesh’s whole planning, she must inform him about Pankti’s decision.

In the kitchen, Vaidika was pouring food for Ved. Sahil calms his nerves down then says Ved doesn’t like much oil in his Khichdi. Vaidika replies he knows what his son wants. Sahil says he brought Ved for longer than she did. He continues irritating her and says she herself claimed they are only parents to their children; he holds a complete right to intervene. Vaidika gets a call from Ved and was tensed at once, she runs out of the house. Sahil also receives a similar call and hurries outside.

They gather outside Vaidika’s old house which was locked. Vaidika cries out of panic. Ved calls them with a wide smile on his face. They move inside. Bari Amma, Nani and everyone looked around the decorations and lighting arrangements for Valentine’s. Ved was extremely excited. Sahil whispers to Vaidika that they can at least celebrate for Ved. Vaidika appreciates Ved’s planning and asks what they need to do. Ved suggests about a dance. Prachi thinks this might spoil Puneesh’s plan. Vaidika and Sahil dance with each other.

Usha and Mandagini watched the celebrations. Mandagini tells Usha she has failed to separate Sahil and Vaidika. Keeping Pankti’s mother at home is going to be useless. She herself goes to Deepak, as he appears her only gate into Agarwal house.

Ved was upset as his parents weren’t speaking to each other and sat at different corners of the hall. Aarya finds a gift box on the table. Guddu stood with a bouquet for her. He insists that this is their first Valentine’s Day, he really wish she accepts it. Aarya takes the bouquet.

Deepak looks around for Puneesh as the cold drinks hadn’t been arranged. Mandagini comes to hug him from behind. Deepak was irritated and asks why she is so behind him. Mandagini asks her Valentine’s gift. Deepak takes to flee from there. Mandagini dreams of ruling this Agarwal house one day.

Age is Just a Number 7th October 2020 Update ends with Deepak hearing Prachi’s voice and wonders what’s happening. He looks ahead and finds Prachi and Puneesh in Sardar’s disguise together. They discuss that Puneesh will not let Vaidika and Sahil unite at any cost. Deepak decides to take the news of this betrayal to Puneesh in jail.