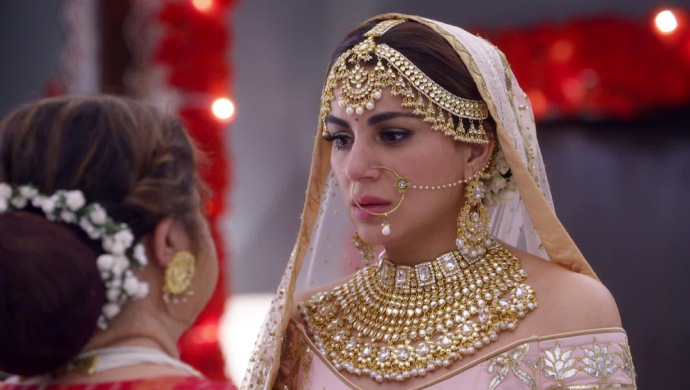 Kundali Bhagya 12th October 2020 Update starts with Pawan trying to wake Prithvi up. His men bring coffee for Prithvi and pour spoonfuls in his mouth. There, Preeta tries to burn the rope in her hands.

Pawan spots her. His man offers to get the medicine which the doctor messaged. He tells him to first hold Preeta at gun point. Pawan spots Shrishti behind the window.

Maira says she knew Sarla would say so. Sarla shouts she wanted to speak to Rakhi only, if Maira has no manners. Sarla says she knows Rakhi did not like it when Karan married Preeta. She also did not like when Preeta married Karan. But Preeta did all this for some reason. Dadi asks Sarla the reason. Karan married Preeta because he believed Preeta was behind Mahesh’s accident, and wanted to revenge her. Sarla looks towards Sherlin and Maira.

Pawan comes to corridor and asks Shrishti who this pretty girl is. Shrishti boasts about being a lioness. Pawan grabs her hands behind her. She says she is Preeta’s sister. Pawan takes her inside. Shrishti sets to loosen Preeta’s rope. Gabbar asks if he should kill her. Pawan wanted to see them reunite. Preeta and Shrishti hug each other. Pawan says now it’s a proper wedding, groom from his side and bride’s sister from her side.

Preeta says this is not a Pandit of reading wedding vows, he is a Pandit of cremations. Pawan slaps Gabbar. Gabbar says he instructed to bring the first Pandit he meets.

Sarla thinks she can not tell them the reason. Otherwise, may be Sherlin and Maira play a move and blame Preeta again. Sarla says she knows the reason, but Preeta will decide if she has to tell them or not. Sarla speaks to Rakhi that Preeta loves her a lot, not any less than she loves her mother Sarla. She asks Rakhi if she has accepted Preeta as a daughter in law, then what this Maira is doing here. When a girl comes to her in laws, she has a number of dreams for love and respect. Not everyone likes Preeta, but Rakhi loves her.

Any girl would never like to see around the other girl, who wanted to marry her husband. When Maira insults her mother, how much she would have insulted Preeta. Rakhi must have graced Preeta with her due respect. Ramoona stops Sarla. Sarla asserts she will say what she feels. Maira brought this letter. Preeta can never write all this, and this writing is also not Preeta’s. She recognizes Preeta’s handwriting.

Maira must have written this letter. She has done something wrong to Preeta. She cries and blames Rakhi who has kept Maira in the house. Rakhi never graced Preeta the respect; she believes Maira and never trusted Preeta. Maira must know where Preeta is. Sarla asks why Preeta came here if she had to leave. Rishab consoles Sarla. Sarla cries that Preeta is not so weak. She had come to her mother’s house when they ousted her.

Sarla says there is something surely wrong with Preeta. This Maira wants to take Preeta’s place, she wandered around wearing Preeta’s clothes. Maira did all this. Rakhi must have told Maira to leave, then Preeta must have been here. She demands Rakhi where her daughter is. Everyone blames her daughter, and no one questions her enemy. Rishab consoles Sarla and requests her to stop. He promises to find Preeta.

The goons tie Janki’s hands and feet and leave the room. Janki untie her ropes and waits for the goons to come inside behind the door. When the open the door, Janki hits their head. Their dagger fell down. Janki holds the dagger on them.

Dadi tells Sarla she must be right. But she should not blame Rakhi for everything. Sarla says they shouldn’t have done reception and all, but at least sent Maira away. Sarla blames that Maira is here because of Rakhi. Rakhi leaves. Karina asks Sarla if she is happy now, Rakhi did not say a word to her because she respects her dearly. She says it is not because of Maira, Preeta is not here because she ran away with her lover.

Ramoona now insults Sarla, as she now wishes to end her melodrama. She says this is the reason she offered to leave. It was Karina, Rakhi and Dadi who stopped them; now she and Maira are being insulted.

Janki thinks they are looking for a chance to run. She can not let them run. She decides to counter them well. She shuts the door of the room, and says she done 420 murders. He has just freshly murdered three men. She intrigues them to tie themselves and leaves the room.

Kritika calms Ramoona. She tells Sarla what is happening is not right. Rishab tells Kritika to stay silent. Sherlin’s mother demands why Rishab shuts everyone and not Sarla. Rishab asks if she will understand? There has only been argument, pointlessly. He tells Sarla to say whatever she wants to. Sherlin’s mother blames Sarla, its better she leaves.

Sarla cries that this is her daughter’s house, and her son in laws. She won’t leave until Preeta is here. She gets a cough. Karan brings her a glass of water. Rishab takes Sarla to be seated.

Kundali Bhagya 12th October 2020 Update ends as Ramoona fills Dadi’s ears that they are even losing side of their sons. 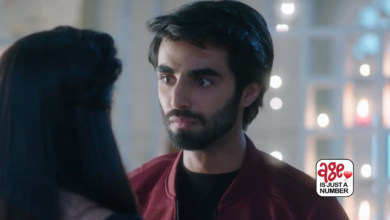