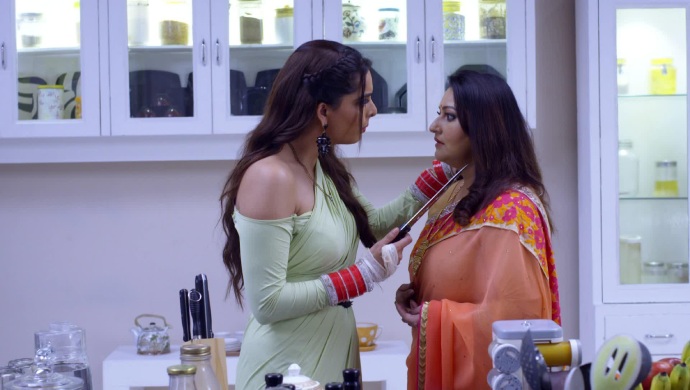 Kundali Bhagya 5th October 2020 Update starts with Pawan exclaiming that his brother takes what he desires without caring for the means with which the objective is accomplished, and the things which he does not by asking he takes it forcefully. Pawan asks if he should assume that she would marry his brother. Preeta replies she is already Karan’s wife and cannot marry his brother so she is not his sister in law.

Pawan sits back exclaiming that she is right. She has not married his brother so how can he call her sister in law. First he will get her married and then call her the name. Preeta pushes him mentioning that she will not marry Prithvi again as she has been married to Karan however he says that she will marry until it is his brother who is her husband.

Gochu brings the water but Preeta drops the glass. Pawan asks him to take Prithvi away and get him dressed with in the same clothes he wore on the day of his wedding. Gochu takes him away but is confused as he did not see Prithvi, Pawan exclaims that the suit is still in the room.

Pawan mentions that it is a sign of obsession, Prithvi still loves her a lot so has kept the clothes, he asks her to rest assured as he has brought the mangal sooter filled with diamonds, he warns her to never try to escape as there are a lot of people outside who will catch her so she must be ready and come out with a smile.

Pawan is sitting when Gochu comes, He had dressed Prithvi who looked really nice, Pawan orders him to talk less, then he calls one of his men to bring the essentials of the pooja, he gets worried by Pawan orders that he leave as they will get both Preeta and Prithvi married. He also orders Gochu to leave and bring a Pandit but he constantly forgets something which irritates Pawan who orders that he hurry.

Sherlin is pulling Maira when she pulls her hand, Sherlin says she knows that is Maira under the veil. She asks what is Maira doing, it is not the right thing because Preeta is Karan’s wife. Maira exclaims that she is the doing what was supposed to be her. Ramona also comes mentioning that she should not do this as it is madness, Maira breaks a vase demanding that has she gotten her answer, Ramona says she can do what she desires but is on her own, Sherlin is also forced to leave.

Pawan is sitting while everyone else is preparing for the wedding, Gochu brings a Pandit who tries to explain them something however they threaten him with his life and so the Pandit is forced to sit. Preeta tries to leave but Gochu stops her and explain that they are doing all the preparations for her so she cannot leave. Pawan warns that she is forcing them to get angry, she cannot leave.

Janki is shocked to see that they kidnapped Preeta from the party so she must do anything and everything that they can to rescue her. She cannot think the name of the person whom Pawan is calling his brother but is shocked when he explains that it is Prithvi.

Sherlin questions Maira about the whereabouts of Preeta, Maira answers that she always used to say that she is the Seeta however it is not he case. Karan is also not Ram but Krishna, who is love of a lot of women but there is only one wife and she is like that for Karan. Sherlin tells Maira to be practical as both Lord Krishna and Ram were gods, but in this life everyone is a human. It is not right to compare them both. Maira exclaims that she only desires that she marry Karan and the one who calls herself Seeta is not there to create problem.

Sherlin does not understand. Maira says where there is Ram there is Seeta, and with her is Rawan who will do SeetaHaran; and it has happened. Sherlin does not understand so. Maira tells her that she has called Pawan Malhotra who came to take her for his brother. It is all sorted now. Sherlin slaps her shouting she does not know what she has done. Pawan is like a fire which will burn everything that comes in its way, she is really tensed about their future.

There, Janki enters the house in an attempt to save Preeta. She attacks Pawan but beforehand Gabbar uses chloroform to make her unconscious. Preeta was worried for Janki now.

Kundali Bhagya 5th October 2020 Update ends as Ramona shares her worry with Sanjana that it will be embarrassing if someone finds out about Maira.