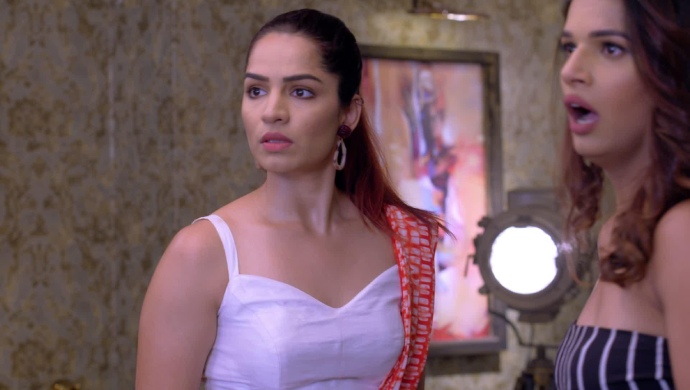 Twist of Fate 16 October 2020 Update starts as Pragya thinking where is Abhi and wonders if he is scared of Dadi.

Abhi says I have to go back to my room and implement my planning. Pragya comes to Dadi. Dadi tells her that she asked Abhi to go to other room. Pragya says Abhi gets scared in nights and if he gets thirsty then. Dadi says then your problem will not be solved if you do like this. She says you can’t stay without him. Pragya says she can adjust anywhere, but Abhi doesn’t sleep in such room. Dadi says he can sleep anywhere and says he has not forgotten his old days.

Abhi tells Tanu that Dadi failed his idea and thinks to convince Dadi somehow. He asks her to wait and watch. Dasi asks what happened? Abhi says everything is ruined. He says I was implementing your idea and then Dadi came when I was flirting with Pragya. Dadi always supports truth and scolded me. Dasi tells him that she will support him and convince Dadi.

Abhi sees Pragya smiling and thinks she is in a very good mood. Abhi asks her to pull his ears. He says I came to know that I miss you very much all night. Pragya says I didn’t miss you. They argue. Abhi asks what you will do if someone tease you. Pragya says I will not allow anyone to touch me. Abhi says you might have someone in your life. He tells about the meeting with the investor. Pragya agrees to attend the meeting and do his work. Abhi thinks love is in the air.

Purab comes to the market and thinks what to buy for Bulbul. He comes to the road side stall to buy something unique and happens to see Vijay, but doesn’t identify him.

Dasi tells that Dadi has changed. Mitali looks carefully and says she is looking different. She says previously she used to be ill, but now she is healthy. Aaliya says our Dadi couldn’t say anything since Pragya has taken over. Dadi says no one can go against me, and says Pragya is doing right, making you understand value of money and also making you do the work. She says if Pragya tries to harm anyone of you then I will not leave her. Tanu asks why didn’t you stop Pragya from halting my marriage. Dadi says your to-be husband is not interested in marriage topic, then how can I speak alone. Dasi asks where did you go daily. Payal comes and says I know……..

She says I have seen her going to Gurudwara two or three times. Ronnie tells about Pragya’s rule and asks them not to sit together else he will throw cockroach and rats on them. Everyone runs from there. Ronnie sits to have lunch. Payal thinks to teach him a lesson.

Finally Purab sees Vijay and gets down his car to follow him. Vijay sits on a tea stall to have tea. Purab sees him and thinks to call Pragya first before calling Police.

Pragya thinks to enquire about the papers from Abhi and thinks he is smart and that’s why she has to wait. Purab calls Pragya and tells her that he has seen that killer Vijay who tried to kill her on Ravan Dahan. Pragya is shocked and asks him where is he? Purab says he is in Bandra. Pragya asks him to follow him secretly and says she is leaving from there. Abhi is looking happy. Dadi thinks may be he is going again to trouble Pragya. She ask where is he going?

Abhi says Pragya…….Dadi scolds him and asks who is more important for him, she or Pragya. Abhi says ofcourse you. Dadi says okay and asks him to come. Abhi acts to stay back. Dasi comes and asks abhi to go to his room. Abhi says he is going with Dadi. Dasi says I will go with her. She understands that Dadi wants to stop Abhi. Dadi says she wants to stop her as Abhi takes panga with Pragya and troubles her. Dasi laughs and is happy.

Pragya tells Abhi that to cancel the meeting as she have to go somewhere urgently. Abhi asks where is she going and says you are changing color. Pragya asks him to become his boss for one day and torture her all day. Allah Wariyan plays…………..

Pragya asks him to let her go. They have an eye lock. Abhi leaves her hand and goes. He returns her purse and she goes. Abhi thinks if she doesn’t return on time then his plans will fail. Purab follows Vijay. Pragya comes there and tells him that Vijay is a dangerous man. Bulbul comes there and asks what they are doing here. Pragya asks did you call her? Purab says no and says he has ignored her call. Pragya asks her to go.

Purab tells her that they are following someone. Vijay leaves from there when they were busy talking. Pragya says you have diverted our attention and he managed to escape. Pragya gets abhi’s message asking her to come for meeting. Purab asks her to go and says they will search for Vijay.

Pragya comes to the pub and thinks why did Abhi fixed the meeting in the puja. Abhi introduces her to the investors and says they have accepted the clauses. He says clients wants you to dance, and wants to see our chemistry as they are making ad. Pragya refuses and says you are doing ad with them, but not mine. Abhi says you have still qualities of old Pragya, and says you are still emotional and couldn’t dance like her. Pragya says it is not as such and sees Purab and Bulbul coming to the pub.

She excuses herself and goes to Purab and Bulbul. Purab tells her that the decorator is here. Pragya says Abhi is asking her to dance with him. Purab says it is a good idea and asks her to dance so that they can catch Vijay. Pragya comes to Abhi and says she don’t have any objection to dance with you. Pragya dances with Abhi on the song Uffo Isse Daant ke Bhagawo.

Vijay sees her and runs out of pub. Purab and Bulbul come out and see him already eloped. Pragya comes and asks them to find in different ways. Abhi wondes why did Pragya leave in a hurry and calls her. He asks where are you and says he is waiting for her near the car. Pragya asks him to go home. Abhi sits in the car and drives car. Pragya says I can’t talk to you now. Abhi says who is dying to talk to you and asks her to go to hell. Suddenly his car hits Vijay and he falls down injured. Abhi gets shocked.

Abhi talking to Pragya on phone and does someone’s accident by mistake. He informs Pragya that he hit someone and cuts the call. He asks the people to help him take the man to hospital. Pragya tells Dadi that she is following the decorator. Dadi gets scared. Dadi asks Pragya to come back and says she can’t see her in trouble. Pragya says it is a good chance to catch him. Dadi asks her to return now itself else she will come with all the family members. Pragya says I will come there. She tells Purab that Dadi is scared and asks us to come back. Purab says we shall catch him. Pragya says it is rather diffcult to catch him as it is late now. She says we shall go home.

Abhi comes home. Dadi asks how are you? If you are hurt? Abhi says nothing can happen to him and says he is a rockstar. He blames Pragya and says accident happened because of her. He says Pragya is a boss by name, but she is like peon. He says she is a big liar and went out without informing me. Abhi comes and sees her standing. He asks when did you come? Pragya says when a responsible citizen was talking about an irresponsible citizen.

Abhi says she called me again and again and I have disconnected the call. Pragya says he is lying. Dadi asks him to tell truth. They argue. Pragya says if I give money then how you will learn a lesson. Abhi says she wants to say that I shall go jail rather than paying money.

Pragya talks to the doctor about the injured man. Doctor tells her about his condition. Pragya happens to see his face and is shocked. Bulbul says we lost a good chance to catch the decorator. Pragya thinks he is the same man, and thinks he came to our house. She thinks God wants me to expose the person who tried to kill me. She thinks to inform Purab and Bulbul. Pragya calls Bulbul and she asks her to come there. She says they got the decorator and tells Abhi brought him home as he is injured by his car.

Bulbul says really and asks her to keep an eye on him and be alert. Pragya says okay and says she will tell Dadi once they reach there. Bulbul informs Purab and says lets go.

Dasi asks Abhi if the fish is caught in the net. Abhi says fish is not yet caught in the net. He says she do feel for me, but don’t accept. Abhi sees Dadi spying on them. Dasi tells Abhi that there is a big rat under the curtains. Dadi shouts. Abhi asks her if she didn’t think about him or his kids…….Dasi asks what you were doing here? Dadi makes an excuse. Dasi says I won’t let you sleep today. Pragya calls Ronnie and asks him to return home. He says ok.

Abhi comes to room and thinks Pragya will get angry seeing him. He calls her girlfriend and says he brought gift for her. Pragya says when did I become your girlfriend. Abhi says since the day you danced with you.

Abhi tells her that he is agressively in love with her and says he wants to show 4-5 dance steps. Pragya asks how can a person fall in love twice. Abhi asks her to think and says she is very lucky. He says he has never wooed anyone till now and asks her to hug him. He says what shall I do to convince you. Pragya gets Bulbul and Purab’s message and goes after making an excuse that she is hungry. Abhi thinks she is curved like jalebi and calls her jalebi bai. Dadi, Pragya, Purab and Bulbul come to the room where Vijay is brought. Purab says why he will tell us about the person who has conspired to kill you.

Pragya says he will tell us and then the truth will be out. She sasy we have to wait for him to gain conscious. Abhi enters the room and sees Pragya and Dadi standing together. He wonders about their connection. They change standing position and asks if it is right. Dadi emotionally blackmails him and says her grand son is doubting her. Purab asks how can you doubt Dadi. Abhi says I thought Pragya has taken Dadi in her words.

Purab says we are taking about your betterment and says media came to know about him doing an accident. He says they were discussing the same thing with Pragya. Abhi says he did accident because of Pragya, and now she will help him get out of this mess.

Twist of Fate 16 October 2020 Update ends as Abhi tells Dadi that he is the decorator. Pragya says I remember and that’s why I am taking care of her. 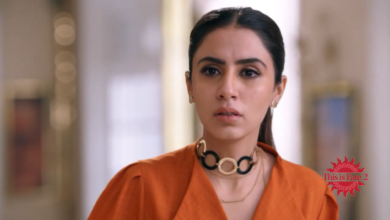 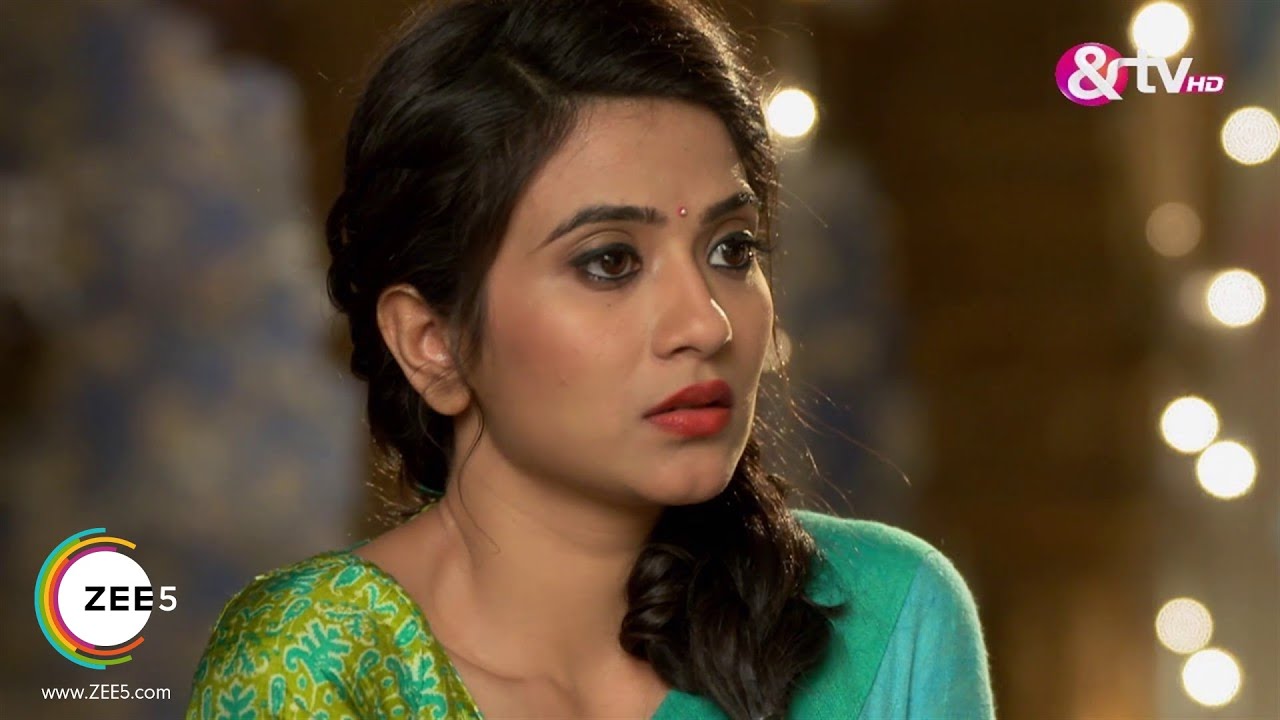 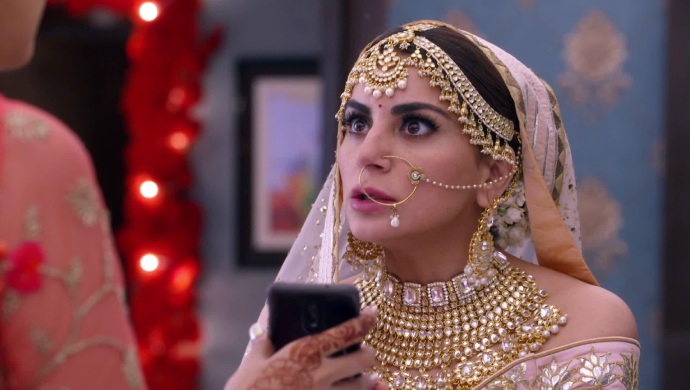