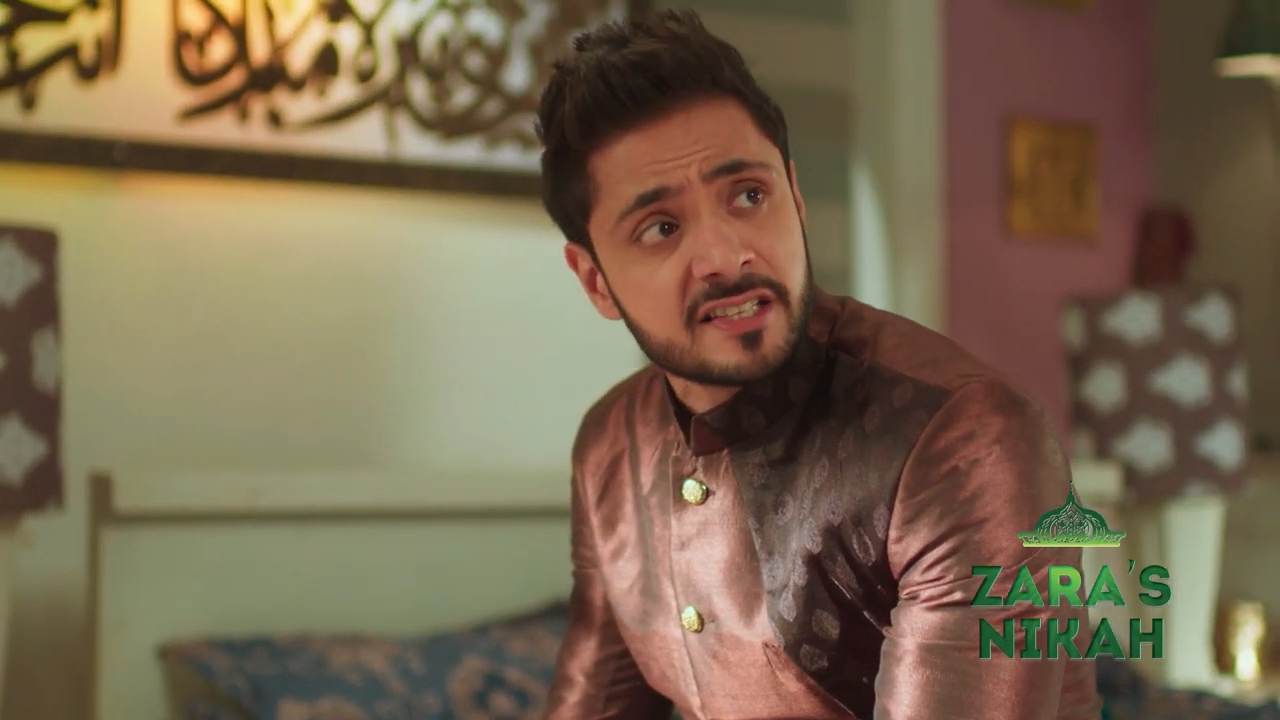 Zara’s Nikah 11th October 2020 Update starts as Kabir says to Zara that I give zakat and it is.. Shahbaz says you dont have to tell her, its between us and our God.

Zara we paid your zakat, zakat for your jewelry too. Kabir says you can read this file and see how we will use zakat of people.

Shahbaz gets tensed as he recalls Kashan changed file, he takes file from Kabir and asks members to check file and see how they will use zakat. Zara says no, maybe you both have good idea for nation but maybe these members have more good ideas, who will decide which one is better for nation? we cant decide it in one meeting, tomorrow Irfan will come too then we will decide together and then spend money on idea which is best for nation, am I right Kabir? Kabir nods. Zara glares at Shahbaz.

Shahbaz and Kabir are going home. Kabir recalls Zara’s words that he doesnt earn to pay zakat. Zara stops them and says dont give my zakat for next year. Shahbaz says why you want to divorce Kabir? Zara says I can bear a lot of problems but I will never leave my husband, Kabir looks on. Shahbaz says till you are his wife then we will pay your zakat.

Zara says I sold my jewelry so you dont need to pay zakat unless and until my husband starts earning. Kabir says dont argue with her, she is a person who will promise to live with you but then dont take their money. Zara says its not your money but your father’s money, if my husband does not earn then I will be eligible to take zakat so Shahbaz can give it to me. Kabir shouts that my father will give zakat to my wife? what is wrong with you Zara? control your tongue.

Shahbaz asks him to calm down, all are looking, he takes him from there. Kabir says give me sometime.

Irfan gets Shahbaz’s call, he takes it. Shahbaz says your daughter is good but your son in law is in pain, his wife is disrespecting him too much that Kabir might resign from sharia board, I cant see my son in pain. Irfan says Kabir is a good person for nation, I will make Zara understand but you calm Kabir down. Shahbaz nods and ends call.

Kabir is driving and sees Zara on road. He says move away, he stops car and comes out. He says have you gone mad? Zara says you were so mad that you could have raised hand on me sharia board. Kabir says yes I would. Zara says no, I know you love me so much that you would never do it. Kabir says you are disrespecting a person who is paying your zakat. Kabir looks away. He says sit in car, its cold, you can give me 50rs for fare.

Zara is about to sit inside but gets Irfan’s call and says I am coming, Kabir says do what you want, he leaves. Zara smiles and says your love shows me that you will come on right path.

Irfan says to Zara that you have guts to do this for your husband but Shahbaz was threatening today, you are hiding something? Zara says my husband is a very nice and genuine person but my father in law is trying to put him on wrong path. Shahbaz comes there and hides. Irfan says Shahbaz was always behind money but he didnt have religious knowledge so he always came short to me, then he made his son a priest and gave his position to him to make him head priest.

Zara says its not about that, he is using Kabir to make sharia board a business center, he wants to take zakat from nation but if Kabir asks for it then people will give it, thats why Kabir doesnt want to work and focus on nation, Kabir is blinded, I have to show his real face to Kabir, I wont let Kabir do this sin and become his father’s puppet. Irfan says once Kabir knows truth about his father and stop following him, I will give my head priest chair to him. Shahbaz hears all that and leaves. Zara’s Nikah 11th October 2020 Update

Shahbaz thinks about Zara’s words that she wont let Kabir become his puppet. Kabir comes there and says I dont like you like this. Shahbaz says you are bringing light in people’s lives, the way you made people understand the value of zakat, you will become head priest soon. Kabir thanks him and says you seem worried?

Shahbaz says you love the person who is giving me worry, you love her more than you but what I listened today made me doubt it. I called Irfan and said that Zara is crossing limits so I might make Kabir resign from sharia board, I went to their house and saw Irfan and Zara talking, you know they were happy that Irfan wont have to leave head position and their plan of sending you away is getting fulfilled as you might resign.

Kabir says what? I dont even want to become head priest, you know it, my mission is to work for nation. Shahbaz says Irfan is worried that nation is behind you, his chair is in danger so his daughter is doing drama of becoming poor so you are insulted and you dont become head priest. Kabir says Zara is not like that. Shahbaz says she is stuck between her husband and father, her father is selfish and doesnt want to leave chair so she is helpless, you saw how she insulted you in sharia board, she wants you to focus on earning money so much that you wont focus on getting sharia board chair from Irfan. Kabir nods and says you heard all that? Shahbaz says I couldnt believe it.

Kabir says she has lost respect from me, she cant take my passion for my nation, I will show her what I am, I will take so much zakat and show her my power. Shahbaz smirks.

Kabir washes hand and recalls Shahbaz’s words that she is doing all that so save her father’s seat, he recalls Zara’s harsh words and how she kept asking him to earn money otherwise she would beg.

Kabir offers namaz and sees Zara trying to pray but Kabir stops and says what are you doing here? you have no right to pray beside me. Zara says what? Kabir says I never doubted your truth but what you did made me lose all respect, you and your father did all this so I dont get head priest seat? you have lost all respect because you are doing all this for your gain.. it turns out to be his dream. Kabir sighs and prays to God that I keep thinking about Zara and broke my prayers for first time today, I have to do something.

Zara is dancing and jumping around. She says I am happy and dances in 50rs because Kabir asked her to give him 50rs so he can take her home in his car. Zara says maybe he is worried about me getting cold here and come to see me. She sees Kabir coming there and is stunned. Kabir comes to her. Zara says they say when you ask for something from heart then God brings it to you and you are here, how much you will take for romantic drive? Kabir drags her from there.

Shahbaz says to Kashan that this 500 crore debt has become a problem for me. Kashan says we will find a way. He sees Kabir making Zara in car and asks if he is taking her somewhere? Kabir doesnt answer him. Kabir sits in car with Zara and leaves. Shahbaz and Kashan sees it, Shahbaz thinks even after all that, If Kabir is taking Zara out then I am lost.

Zara tries to close the window but Kabir says its romantic winds so let it be. Zara asks where he is taking her? Kabir says it will shock you, just wait.One man says to sharia board member on dargah that beggars should be checked as there are some thieves too. Irfan says why did Kabir call me here?

Kabir says yes head priest. Irfan raises hand but Kabir holds it. Zara sees Irfan angry and says let it be, its between me and my husband, if he wants me to beg then I will.

Kabir says you want to scare me? people have wishes and they are scared about it but I dont have wishes now, I had wishes that Zara would come home soon, we would enjoy then I was scared that what if she is hurt while pretending to be poor? you know I was scared that your stubbornness will make our relation break but I dont have wish to get you back so I am not scared for you anymore, so beg now. He makes her stand with beggars. Zara cries. Irfan is hurt to sees Zara getting food from people.

Kabir is hurt but looks away. He leaves from there. Some beggars are standing with her. Police comes there to arrest beggars for people complaining about them. Kabir and Irfan have left. Zara tries to run from there but policewoman stops her and says you are not ashamed of begging?

Zara’s Nikah 11th October 2020 Update ends as Zara says you are wrong. She arrests her and puts her in van. Irfan comes there and is shocked. Baba says this had to happen, see where your husband left you. Kabir sees it too and is shocked.