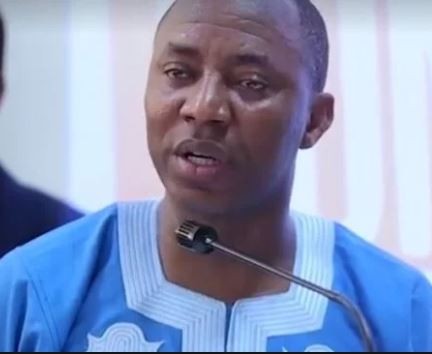 A Nigerian human rights activist, Omoyele Sowore has countered the decision of the National Association of Nigerian Students, NANS to suspend its planned protest on June 12.

NANS had scheduled to stage protest in all parts of the country on June 12 to decry the deteriorating security situation ravaging the country particularly the abduction of students in the North and other regions.

However, the NANS’ President, Sunday Asefon, announced on Friday morning that the planned protest has been suspended over the fear of being hijacked by some elements who may have other agenda.

But Sowore in a tweet on his official Twitter page on Friday said the protests would hold.

He stated this why reacting to the suspension of the report by NANS.

A Federal high Court sitting in Abuja has ordered the minister of Justice, Abubakar Malami and Director General of the DSS, Yusuf Bichi, to appear before the court over continued detention of Omoyele Sowore. Counsel [Read More]

You are a coward for arresting and detaining Omoyele Sowore, Fani-Kayode tells Buhari

Femi Fani-Kayode, the former Minister of Aviation, has described President Buhari as a ”coward and a timid leader” over the decision of the Federal government to arrest and detain Sahara Reporters publisher and ex-presidential candidate, [Read More]