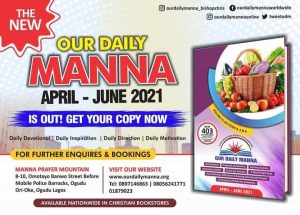 TOPIC: I Shall Not Pay The Price of Another Man’s Battle!

Our Daily Manna 22 June 2021 ODM Devotional: Beloved, let me start today’s devotional with the words of Hash Quotes and he penned: “Your reality is a reflection of your strongest belief.’’ In other words, whatever is happening in your life today is connected to what you believe in your heart. Welcome to today’s devotional.

Andreas Lubitz is the German Wings young pilot that crashed an airbus A320 plane into the French mountains, with 149 passengers on board, in 2018. Andreas Lubitz had suffered and had been treated for chronic depression. But before that fatal flight, he had been seeing numerous other doctors, in his fight against depression. Oh!

DEPRESSION is a dangerous voice! I was nearly a victim when I wanted to commit suicide just before this vision ODM WAS BORN! One error that people suffering from the torture of depression often commit is to kill themselves, believing that once they commit suicide, all their torture will end; not knowing that more torture awaits them in hell for taking their lives and that of other people just as young Andreas Lubitz did, by crashing the Airbus he flew with 149 passengers on board. That was his LAST MEDICINE to end his battle with DEPRESSION! His erroneous belief (a satanic lie) that suicide would end it all cost 149 passengers their lives.

I decree right now: “YOU WILL NOT BE A VICTIM OF ANOTHER MAN’S BATTLE! Yea! You will not PAY THE PRICE FOR ANOTHER MAN’S ERRONEOUS BELIEF! Yes! Yes! Yes! I decree again: You will not die the death of others this year in JESUS NAME.’’ Matthew 2:1-3 says: “Now when Jesus was born in Bethlehem of Judaea in the days of Herod the king, behold, there came wise men from the east to Jerusalem, Saying, ‘Where is He that is born King of the Jews? For we have seen His star in the east, and are come to worship Him.’ When Herod the king had heard these things, he was troubled, and all Jerusalem with him.’’

Note: ALL JERUSALEM WITH HIM! One man’s fear and belief became the fear and belief of the whole city! Wow!This scripture is the reason behind King Herod’s slaughter of all male children, two years and below. King Herod erroneously thought that Jesus had come to contend for his throne with him! A WRONG BELIEF! This wrong belief led to the death of INNOCENT MALE CHILDREN WITH GREAT STARS! This wrong belief led to the quick SUNSET of all the RISING little “SUNS” of destiny! Oh! WASTED INNOCENT MALE CHILDREN WITH GREAT STARS!

1. Take your best song of worship as led.
2. In your own words, pray about today’s word as you are led now.
3. Oh God! I shall not be a casualty of another man’s error in Jesus name.
4. Another man’s battle or mistake will not destroy my life and destiny in Jesus name.

Our Daily Manna 22 June 2021 ODM Devotional Message. Bishop Dr. Chris Kwakpovwe (author of ODM) is a dynamic man of God with strong prophetic, healing, preaching and teaching ministries. Since he met the Lord and got born again on February 3rd 1976, as a student at the prestigious government college Ughelli, Delta State of Nigeria, he has been preaching the word in Creeks, Villages and Cities with signs following.

Our Daily Manna 21st February 2021 ODM Devotional – Only His Wrist Watch Was Damaged! Be Covered!