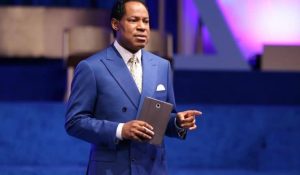 Scripture: Wherein in time past ye walked according to the course of this world, according to the prince of the power of the air, the spirit that now worketh in the children of disobedience (Ephesians 2:2).

Message: The word “disobedience” in the scripture above is translated from the Greek word “apeitheia” and it means disbelief (obstinate and rebellious); it’s characteristically unbelief. So, it’s referring to the children of unbelief. It describes something that’s very much like the spirit of the antichrist.

2 Thessalonians 2:7 AMPC says, “For the mystery of lawlessness (that hidden principle of rebellion against constituted authority) is already at work in the world, [but it is] restrained only until he who restrains is taken out of the way.” “Mystery of lawlessness” refers to rebellion; a defiant opposition to God; to be highly opposed to God’s will; to God’s Word.

There’re people who, without even knowing why, find themselves doing the things they do, in defiance to God. That’s how come you find people who say, “I just don’t like Christians.” If you were to ask them the reason for such hatred, they’ll say, “Nothing; I just don’t like them.” The Bible shows us what spirit is working in such people.

1 Corinthians 2:12 talks about the spirit of the world; and it’s the same spirit we read about in our opening scripture: “…the prince of the power of the air, the spirit that now worketh in the children of disobedience” (Ephesians 2:2). But thank God the Bible says that’s not what we received. We received the Spirit of God and He teaches us and nurtures us in the will of the Father: “Now we have received, not the spirit of the world, but the spirit which is of God; that we might know the things that are freely given to us of God” (1 Corinthians 2:12). Hallelujah!

CONFESSION
Now I’ve received, not the spirit of the world, but the Spirit which is of God that I may walk in truth and obedience. My life is Spirit-ruled and Spirit-controlled; I’m always under the sway and regulation of the Spirit. Hallelujah!

Rhapsody of Realities 28th April 2021 – Faith for the Good Warfare

Rhapsody of Realities 28th April 2021 Devotional Guide By Pastor Chris Oyakhilome Topic: Faith for the Good Warfare Scripture: Timothy, my son, I am giving you this command in keeping with the prophecies once made [Read More]

Rhapsody of Realities 15th July 2021 – Know And Walk In Truth

Rhapsody of Realities 27th July 2021 – A Compelling Desire for Change