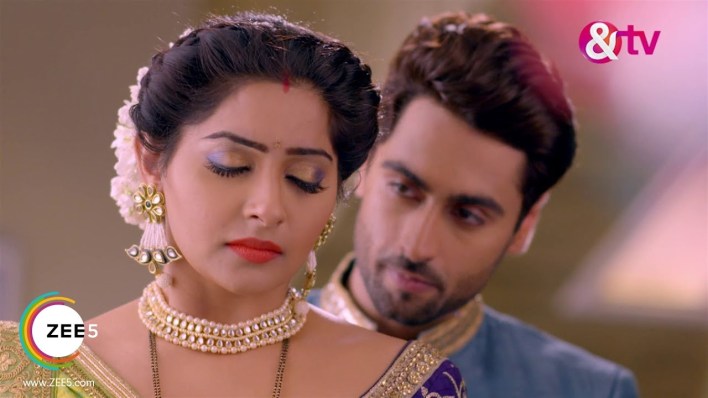 Ring of Fire 15 December 2020 Update starts as Anurag, Ragini, Vishu, and Shristi prays Ichapurti mata. Panditji says they have to follow other rituals to complete pooja. Ragini asks what they have to do. Panditji asks to pick water pot nearby and drop it on one’s wife and then apply mata’s kumkum, he will tell other rituals later. They all 4 walk towards venue. Vishu walks holding Shristi’s hand while Ragini walks looking at Anurag.

Shhristi sits for ritual. Vishu tells Shristi when daadi sent them here, they should complete the ritual. Anurag drops water on Ragini’s head while Vishu drops water on shristi’s head. Anurag reminisces Vikral pointing gun at Vidhvan and Brijbhan, his marriage with Ragini, etc., thinks he is doing all rituals which he don’t like because of Daadi. Shristi reminisces her father’s words and thinks same.

Dulari while preparing garland for pooja asks Daadi if they will remarry in temple. Daadi says as per ritual they will exchange garlands. Dulari says once they come here, they should have halwa to get some energy. Dulari says ammaji has good plans to reunite couples, even she needs once so that her husband comes back to her from Mumbai. Daadi asks to fast on Mondays, her husband will come running to her. Chutki asks her to not fill her tummy full if she is fasting. Dulari says she can fast whole life if her husband returns.

All 4 reach kitchen area. Vishu says panditji told about kitchen prasad, they should have it. Ragini goes to take prasad. Cook says she should have prasad in single plate with her husband and drink water from same glass. Ragini images asking Anurag to feed her from his hands and he does. Anurag gets her out of her imagination and thinks this cannot be reality. Cook says Anurag he has to have food in single plate. Ragini happily says okay and says her hands are paining fighting with goon, if Anurag can feed her. Anurag picks food when Vishu coughs. Anurag pays attention to him. Ragini thinks when will rahu and ketu/Vishu and Shristi get out of her life.

Anurag is about to feed Ragini when Vishu chokes. Anurag changes his attention to Vishu and gives him water. Shristi asks Vishu to eat carefully. They all 4 finish food and walk out of temple. Parag holds goon and waits for car. Car comes. He asks all 4 to go in their car while he brings goon. They all 4 get into car. Anurag thinks however Ragini is, she saved them all today from goons. Shristi also thinks Vishu is insane, but tries to help her a lot.

At home, Brij is busy over phone when Parag with Narad enters holding goon. Brij asks who is this man. Parag asks to bring rope to tie goon. Revati and others come down and asks who is this goon. Ragini enters with Anurag and Vishu and tells her whole story. Anurag says Ragini saved them all today. Ragini says Mukhyayan is behind all this. Mukhyayan enters and asks if she has any proof. Brij angrily points gun on her. Vidhvan scolds him not to take law in his hand and call police. Inspector comes and greets Ragini.

Mukhyayan says inspector cannot arrest without proof. Ragini points gun at Mukhyayan next and says she will shatter her head. Mukhyayan gets worried. Shristi enters and says without proof, Mukhyayan cannot be arrested. Inspector says he came to arrest Mukhyayan on other issue and says Shiristi had filed RTI as Mukhyayan drew money for development work but did not use it. Shristi reminisces Vishu telling Mukhyayan rents their school for other work and they lose studies.

Revati tells Ragini’s bravery saved Anurag, Shristi, and Vishu. Anurag says yes, Ragini’s bravery saved them, but Shristi’’s intelligence got them justice and praises her. Ragini fumes. Anurag then goes to home temple and prays. Shristi tells she brought Ichapurti maiya’s prasad. Ragini says even she brought prasad and they both serve family. Daadi stops them and says she wants to tell one thing, they get strength with pooja, but their good will fulfills their wishes. They both should bond together and solve problems together.

Ragini takes Parag to her room and asks how is it. He says it is fine, but if everything is alright between her and Anurag. She says yes. He says why she saved them all, but everyone was praising Shristi instead. Ragini says Shristi is her biggest problem.

Ragini tells Parag that Shristi is his biggest problem. She says she knows how to control situation, there is no use killing her, asks him to relax. Divya brings juice for him and says aunty sent it. He gets happy seeing her, tastes juice and says it is cold, but less sugar, if she puts her finger in it, it will be sweet. Ragini asks not to pull Ragini’s legs. Parag says she is sister’s nanad, so he can pull her legs. Dulari enters and puts her finger. Parag says he likes sweet, but not so much and asks herself to drink it. His phone rings. Mai rang sharbaton ka..tu meethe ghat ka paani..ringtone plays. He picks call and says maa had called and asked about Ragini. Ragini asks him to tell that she is fine.

Chutki bahu brings food for Vishu and sees him weak, asks reason. He says he is fine. Ragini reminisces him fighting with goons and says he will be fine. Vishu says he will make all the electronic devices in her gifted book and will make her proud. Chutki says for that he has to eat well. Ragini makes him sit and feed him. They sleep after that. After sometime, Shristi sees Vishu shivering in his tent. She gets him up and takes him out.

Anurag takes milk for Ragini and says aunt sent. She gets happy thinking he is caring for her. She thanks him and asks if he had milk. He says yes. She asks him to sleep on sofa today as he must be tired, she will sleep on floor. He agrees thinking he cannot trust her behavior. Ragini makes bed on floor, finishes milk, and looking at him thinks he is so handsome. He looks at her and she nervously turns. Once he is asleep, she thinks how can anyone sleep on floor, it is too hard, her mister is sleeping peacefully.

She thinks of sleep next to Anurag and walks towards bed. He turns in sleep. She gets nervous and hides. She then sleeps next to him and notices her heart racing. He turns. She sleeps looking at his face and thinks sleeping on bed is very peaceful. He puts his hand on her tummy in sleep. She gets nervous. He then puts his leg on her. She silently tries to remove it unsuccessfully. He senses it, opens eyes, sand shouts in a shock, asks what is she doing here, stay away from him. She nervously says that..He asks what she wanted to do.

Ring of Fire 15 December 2020 Update – She says she wanted to take pillow, what was he doing, why did he put his leg and hand on her. He yells she has gone mad, if she wants to sleep on bed, he will sleep on floor. She asks him to sleep on bed and sleeps on floor. He thinks he cannot trust this girl and should be careful. She thinks why she is getting shy.