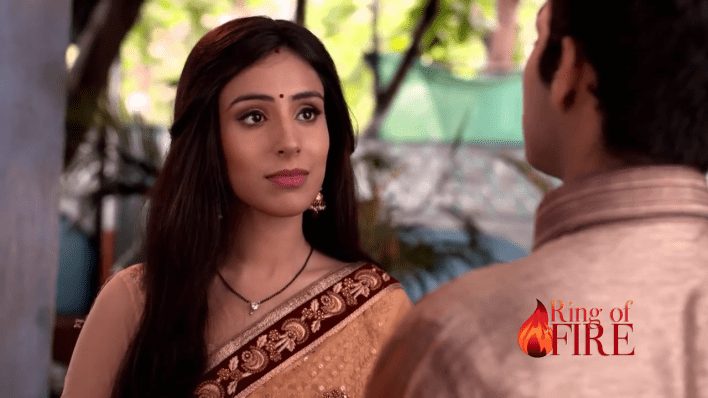 Ring of Fire 17 December 2020 Update starts as Anurag throws Ragini’s money shouting she earned it by looting people. Ragini and everyone stand in a shock. Ragini’s mother enters and says Ragini is like a coconut, hard outside and soft inside. Anurag leaves. Revati asks Briji who is she. Brij say she is Ragini’s mother. Ragini rurshes to amma and asks why did not she inform her before coming, she would have made arrangements. Amma says she can see all. Revati nervously asks her to take her amma to her room and shows it.

Ragini takes her amma to her room and shows all her belongings, her portrait, her misters belongings, etc. Amma says she can understand what is happening here and she will be happy if she sees her and Anurag together. Dulari comes and takes her to show house.

Vishu builds electronic gadgets and asks Chutki bahu if she is happy. She says all parents get happy seeing children’s successs and pray for their happiness. Shristi hears that and says it is not true in all cases. She sadly walks out.

Dulari shows house to Ragini’s amma with her usual commentary. She sees Shristi passing by and thinks she must be lawyer’s daughter. Dulari calls Shristi. Amma apologies her and says her family is responsible for her condition. Ragini sees them and yells at Shristi that she did not even spare her amma. Amma scolds Ragini and takes along. Ragini takes amma to terrace to meet Anurag.

Anurag is seen busy over phone telling his client that they will meet tomorrow and finalize deal. He calls his friend and says they will go to Kanpur and find out investor. Ragini’s amma meets him and says she is Ragini’s amma and she nows well that her daughter will break down but will never accept defeat. She requests him to accept Ragini’s help.

Ragini’s mother Veena tells Anurag that god makes relationships and human take it further with compromise and understanding. She further says she knows Ragini well, she will shatter but will never accept defeat. Revati enters with snacks and tea and says if damaad and saas’ discussion has finished, can they have tea and snacks. Veena says she knows that they don’t even drink water in daughter’s house, Ragini told she takes care of Ragini well.

Revati says Ragini is her like her daughter. Veena says she wants her whole family accept Ragini as bahu, pointing at Anurag. She walks down continuing moral gyaan to Ragini. Car comes. She takes out 1 crore cheque and reminisces Vikral telling to give this cheque to damad and tell him he wants to help his damad with his loyal money. She keeps back cheque and leaves.

Shristi in her room reminisces Purshotam telling that her mother called her many times, but she did not pick call. She then reminisces Veena’s words apologizing her and telling her family is responsible for her problem.

Ragini enters room. Anurag asks to keep ironbox, thinking her as Dulari. She stands confused. Dulari brings ironbox and signals Ragini what is happening. Anurag fumes that their sign language will not stop. Ragini insists that she will iron. He says he used to do his own work in London. She says here she is present with him. He says her presence does not matter to him and they are like 2 walls of this room and will never meet. She says she is a human and will continue trying. He says her foolishness lets her make mistakes. He says tomorrow his friends are coming and she should not act dumb in front of them. She thinks she will dress smartly and impress them

Vikral speaks to minster and says he will help him clear his defamation and asks to stop some video circulation in return, he will meet personally and speak. Veena serves breakfast to Vikral. He says he could not speak to her last night as he came late, asks how is Ragini. She says she is fine. He asks if she gave 1 crore cheque. She thinks how to tell his damad does not value his money, says she gave cheque to Ragini, it is up to her when to use it. Vikral says he can send more money, whatever he has belongs to his daughter. He leaves for meeting with minister without finishing breakfast.

Anurag sits for breakfast with others. Ragini serves him and says Chutki chachi prepared it. Vishu plays with anurag. Anurag asks how is he. He says fit and Shristi is giving him medicines even now saying he has to complete medicine course. Revati asks where is she. He says she is studying for her exams. Shristi comes down. Revati scolds she should concentrate on house instead of wasting time on studies. Anurag gets angry and says study is for knowledge and if she thinks he did not earn money yet, he will earn money soon. Revati says she will telling about Shristi. Anurag leaves food and walks away. Ragini fumes that sasuma scolded Shristi and Anurag is feeling bad.

Ragini calls Narad and asks her to bring he listed items. He agrees and takes it to Ragini’s home. Brij does gardening and chats with Narad. Anurag’s friends enter and thinking him as gardner call him Ramu kaka and asks if this is Anurag’s house. Anurag comes out and introduces him as uncle. He taunts whoever does gardening is not gardener.

Ring of Fire 17 December 2020 Update ends as Anurag takes them in and shows his project. They like it. Shristi passes by. He stops her and says she gave him initial investment idea. They praise that she got an intelligent wife. Anurag and Shristi hesitate. Ragini enters wearing funky colorful clothes and says she is Anurag’s wife. Everyone look in a shock. Anurag feels embarrassed.