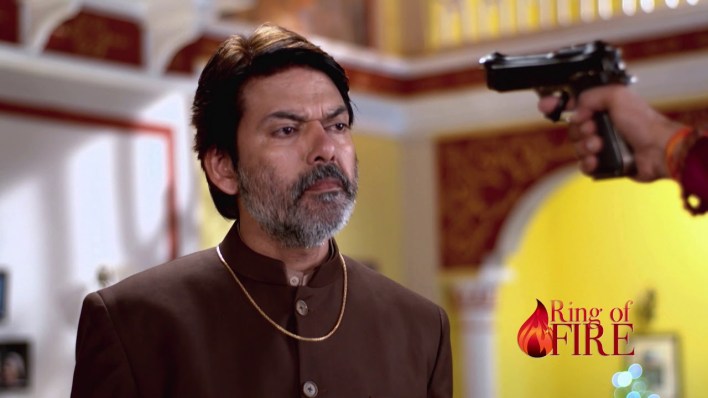 Ring of Fire 1st December 2020 Update starts with Vidhvan bringing Vishu and Shristi home and asks Revati to do bahu’s graha pravesh. Revati says Anurag has not come yet and she will perform elder bahu’s graha pravesh first. Vidhvan stands fuming and says Shristi saved his and Purshotam’s dignity.

Daadi says she will perform graha pravesh and goes in to bring items when Anurag and Ragini’s car enters. Parag gets out of his car and tells Anurag that he is his brother-in-law now and they share a special bond.

Revati performs Ragini’s graha pravesh with their family ritual of letting her step into bamboo basket. She reaches till steps. Revati asks her to step into home by kicking rice bowl. Daadi stops and says both bahus’ graha pravesh will happen at once. She performs Vishu and Shristi’s rituals and asks both bahus to get in. Shristi says before coming to this house, she felt very helpless, but after coming here, she realize some other people are also helpless here, she does not believe in kicking rice bowl and getting in.

Anurag shouts it is enough now. Daaadi asks him to calm down and takes both bahus to home temple and says durga maa is their family god. Ragini loudly chants durga maa ki jai. Everyone look around. Vishu repeats loudly. Everyone smile. Daadi asks both bahu’s to touch maata’s feet and go to their room. Shristi says she came here helpless and does not want to be bound by any relationship here.

Revati enters Ragini’s room and says Anurag is very good and soon he will accept her. Ragini says the moment she saw Shristi here, she realized whole situation, now she will handle situation and Revati should make sure Shristi is under control. Revati leaves.

Brij’’s wife gives milk to Vishu and asks him to finish it soon. He says he finished half and cannot drink more. Divya comes and says let us play. Vishu leaves saying he will defeat Divya. Dulari sees that and thinks he has to be in his room, but he is busy playing. Brij’s wife goes to her room. Brij brings money suitcase and keeps it. She says he sold his soul for one more bag. He says she does not know how he and Anurag escaped death. Wife continues. He raises hand to slap her. Vidhvan sees that and shouts dare not to touch bahu. Brij walks out.

Shristi’s mother Surekha calls her repeatedly, but Shristi does not pick call. Surekha says Purshotam that they threw Shristi in hell, why will she pick their call. Purshotam says he got Shristi married in a good family and things will change soon.

Vishu watches TV with Divya and enjoys. Dulari comes and says he should go to his room. Vishu asks how can he go there as Shristi is there already. Dulari explains him about suhagrat and how her husband gifted her so many things during her suhagraat, etc. Vishu takes jalebi and milk to his room and eats some. He decorates room with flowers.

Ragini sees her portrait in a corner and thinks that is why Anurag did not love her at all, she fixes photo in front and thinks now Anurag will start loving him seeing her portrait. She waits for Anurag. She senses someone coming and dorns ghungat. Dulari enters and says Anurag will not so easily, so she has to spread her charm on him herself. She walks out and sees Anurag busy on his laptop.

Shristi enters room and sees it well decorated. She asks who did it. Vishu says he did it and got even jalebi and even milk for her for their suhagraat. She asks who told him. He says Dulari and tells what she told. Shristi says they are not married at all and it is just an agreement and he should stay away from her.

Shristi scolds Vishu if he knows what marriage is. He says Dulari did taught her. Shristi says they are not married really and asks him to go out. He says daadi told to stay in room. She insists. He leaves room and runs away. Daadi notices it and enters room to give Shristi some moral gyaan. Shristi tells she does not consider this marriage. Daadi says Vishu is an uncut diamond and she should mould him the way she wants.

Revati sees Anurag working on sofa in living room and tells him that marrying Ragini is a destiny. He continues fuming and says Ragini is unfit for him. Ragini enters and asks what is the problem in her, she does makeup to look good and is learning English for him. He continues yelling. Revati says Ragini brought milk and jalebis for him to sort things out but he is getting so adamant. He gulps milk in one go and says if things can sort out by drinking milk, he will see what will happen. Drama continues.

In the morning, Divya goes to Shristi’s room to give tea and does not find her. She informs family. Dulari says she must have eloped stealing something from home. Ragini comes down and says even Anurag is missing, they both must have eloped together. Vidhvan says they are responsible for this situation. Ragini calls Narad and asks him to get her gun. Vikral hears that and reaches Vidhvan’s house. Vidhvan starts insulting him and says if he had not forced Ragini and Anurag’s marriage, this would not have happened and says he would respect stranger, but not a goon, be it his relative.

Ring of Fire 1st December 2020 Update ends as Vikral fumes and points gun on his forehead. Brij confronts that he cannot insult them in their home. Ragini wanrs him to back off. Vishu confronts she cannot insult his chacha. She raises hand to slap Vishu.

“You Are So Rude” – Erica Slams Kiddwaya On Sierra Leonian Tv