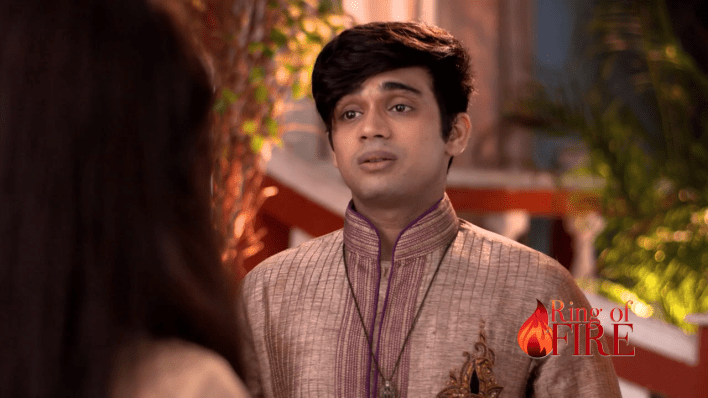 Ring of Fire 2 December 2020 Update starts when Vishu confronts Ragini for insulting Brij. Ragini shouts how dare he is and raises hand to slap him. Shristi enters and warns her to stop. Ragini asks where is Anurag. Shristi asks how will she know. Vikral asks where is Anurag babu. She says he should ask it to his daughter as only wife can know about her husband’s whereabouts.

Revati asks she can at least tell she she had been. Shristi shows notes and she had called her friend outside village to get notes. She says she will not do anything which will harm this family’s dignity and walks to her room. Dulari comments she shut everyone’s mouth with her reply. Revati warns her to shut blabbering her nonsense. Brij says his men are searching Anurag throught the zilla and he will be found soon.

Brij’s wife tries to feed Vishu, but he continues panicking and rejects food. She leaves. Shristi enters room and asks why he is not having food, why Ragini scolded him. He says he told truth. She says he cannot take wrong route to confront wrong. He starts eating food. She smiles. Ragini angrily tries to enter her room, but stops seeing Daadi passing by.

Vikral returns home and over phone orders minister to check London flight’s each passenger detail and find out if Anurag is boarding flight. He tells his wife if Ragini was here, she would have solve the problem within seconds. Wife says she already warned him not to do this forceful marriage. He shuts her mouth.

Shristi then sees Daadi asking Vidhvan why he is looking tensed. Vidhvan says he got Anurag educated so that he can take house’s responsibility, but he failed. Daadi consoles him that everything will be alright. Shristi then goes to her room and writes on laptop if what Anurag did was right, if running away from self is a solution.

Ragini picks his gun and tries to leave house, but Revati stops her and says she just got married yesterday and cannot got out. Ragini says she is modern age savitri and is going out for her mister. She takes her blessing forcefully and leaves. Dulari comments that both bahus are not at home.

Anurag reaches hotel and calls his friend to get his London ticket at any cost. He walks out of hotel room hiding his face. Goons surround him in their car and get him in.

Brij’s sister’s husband enters home. Brij warns him to stay away as he died for them when he married his sister without consent and is a big goon. Man asks he was a goon in college, but their samdhi is zilla’s biggest goon, their eyes are blind with Vikral’s money now. Brij stands silently.

Ragini reaches hotel and after a slap manager confesses that Anurag had come here, but left. Ragini fumes that whole Zilla knows that she is searching her mister, but how could he let her go. She gets a call that someone else took Anurag towards home.

Vidhvan’s jijaji/BIL tells him that his wife still does not consider their marriage complete as she did not get her elder brother/Vidhvan’s blessings. He asks how much money he should give to get his wife’ happiness. Vidhvan says he was wrong before and even now. BIL says love is pure and unique, they lost their daughter, but should not lose their son Anurag at least.

Anurag comes out of his car and goes in. Revati asks why did he elope. He starts confronting that the people he came for from London troubled him most and broke his trust, especially Revati. He says they all sold him for their benefits. He saw his father, Vishu, and Brij being pointed a gun and he was forced to marry someone he does not like. He cannot apologize a person whom he owes a lot, Shristi. Ragini enters. Anurag shouts he will never consider her as his wife, though will be his husband whole life.

Vikral gets a call from his aide that Anurag returned home. He orders aide to find whom Anurag met, whom he was with, etc. His wife asks if Ragini’s husband returned home or Anurag. Vikral tells she wanted to call Ragini and Anurag for paghperas, she can invite them. Wife gets happy. Purshotam tries to work on laptop and forgets commands. His wife says Shristi is not picking calls at all. He says she will calm down and asks Sumer to call Shristi tomorrow for pagh pheras. Sumer says Shristi will not come. Purshotam says daughter’s relationship strengthens after marriage.

Brij’s wife sees Anurag sitting tensely in balcony and says time will heal everything. Anurag says he does not know what to do. Vidhvan enters and gives his moral gyan.

Shristi in her room writes on laptop that Anurag is facing same dilemma which she is facing. Vishu comes and sleeps on bed. Ragini in her room fumes she will see how will Anurag not accept her. Anurag enters. She stands in front of him. He picks pillow and bedsheet and walks to sofa. She gets her mother’s call who invites her for pagh pheras and asks to come with Anurag.

Ragini agrees, but thinks how to convince him. He sees Anurag sound asleep on sofa and tries to pull table next to it. Anurag wakes up and asks what is she doing. She says trying to unite beds. He sleeps on table. She sits on bed whole night tensely while he sleeps. Shristi also sleeps on bed while Vishu sleeps on other side and pulls blanket. Dulari tells Revati that both boys are sleeping in their life, soon their married life will be on track.

Divya informs Shristi that her brother has come. Samar tells Daadi and Vidhvan that maa sent him to invite Shristi for pagh phera ritual. Daadi says it is good ritual, even they follow it. Shristi comes. Sumer says he came her to take home for pagh pheras. Shristi says house is where happiness is, where is her house, papa did her bidayi to this house and she will not come from here. Dulari comments how can a sister yell at brother like this.

Vidhvan tells Shristi that she should go. Sumer says his sister will not come and leaves. Daadi gives shristi moral gyan that salt cannot be driven away by salt and tells importance of paghpheras. Vidhvan asks Shristi to go to her house and get books in lieu of pagh pheras. He asks Brij to get car out, bahu will go for pagh pheras. Brij gets Parag’s call and says he can come for pagh pheras. Vidhvan fumes and Revati gets happy and thinks how to convince Anurag for paghpheras.

Ragini thinks how to convince Anurag for pagh pheras. Revati goes to Anurag and says he should go for pagh pheras with Ragini. Anurag says he does not consider this marriage at all. She says he should consider his marriage as fate and should accept it, she accepted his alliance with Shristi, but fate had something else in store. She then goes to Ragini’s room and asks to get ready for pagh phera ritual. Dulari comments how will she convince Anurag. Anurag enters and says he will follow any ritual as he does not want any problems in this house because of him. Ragini gets happy and says she will get ready soon.

Parag comes and greets everyone. Ragini comes and asks why did he come so late. He says he brought gifts for everyone. Ragini distributes gift to everyone boasting they are very costly. Parag gets shy looking at Divya. His phone rings with Tu ne maari entriyan to…ring tone. Divya smiles. Her phone rings with same ring tone. Everyone look at her. Dulari asks where is her gift. Parag says they did not meet before, so he did not bring. Ragini takes money from him and gives it to Dulari. Dulari says she will manage with this money and asks to bring gift for Shristi also next time. Ragini silently looks.

Vishu comes down and gets excited seeing so many gifts. Daadi asks both bahus to come to temple for shagun. Vidhvan signals Shristi to go. Daadi gives shagun and money to Vishu. Vishu asks what will he do with so much money. She says he is going out with his wife and may need it. Both couples walk towards door.

Ragini travels in car with Anurag and looks at him repeatedly, but he looks outside window. Mile ho tum humko bade naseebon se..song..plays in the background. She says it is hot and asks driver to increase AC. She thinks if driver applies brake, she will fall into Anurag’s arms. Vishu travels with Shristi and thinks daadi told to feed her something. He sees roadside juice shop and gets juice for him and Shristi.

Ring of Fire 2 December 2020 Update ends as Shristi says she does not need it. He says daadi told to feed her something. Driver applies brakes and Ragini falls on Anurag and thinks at least via pagh phera ritual, she is close to Anurag.