Roger Federer claimed his EIGHTH Wimbledon singles title, the most by any man in any era, after Cilic broke down in tears during the second set.

The big Croat had a problem with his left foot which was later treated at a medical timeout.

And the strange sight of a Wimbledon finalist in such distress took some of the gloss off Federer’s remarkable achievement.

When Sabine Lisicki had a meltdown against Marion Bartoli in the ladies’ final of 2013, the tears came out of frustration and despair at how the match had turned.

Cilic’s issue appeared to be purely physical and he avoided becoming only the second player ever to retire in a Wimbledon final. 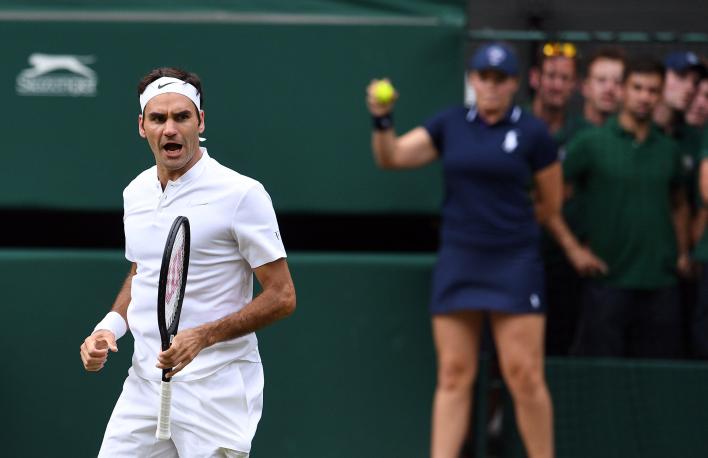 But he could not deny Federer a triumphant return to winning ways.
The first set, at least, was competitive.

Federer had to save a break point in the fourth game as Cilic made a confident start.

But in the fifth he set up a break chance of his own with some fantastic play which had the crowd on its feet.

And Cilic conceded another break, and with it the set, in the ninth game, despite going 30/0 ahead.

The Croat was soon behind in the second, making three groundstroke errors from 30/15 up to hand Federer the game.

After the Swiss had held serve to take a 3-0 lead, Cilic broke down while sitting on his chair.

After a brief conversation with the trainer, he sat with a towel over his head to compose himself and when he belatedly answered the umpire’s call of “time”, the crowd gave him a rousing reception.

But Federer showed no mercy, losing only two points on his serve in the whole set and taking Cilic’s again. The Croat appeared to be treated for blisters during the break.

It seemed to do him good and the third set was even for a while, but yet another forehand error by Cilic gave Federer the chance to break for a 4-3 lead, and he took it.

The Swiss then served his way into the record books with an ace, claiming his 19th Grand Slam and continuing a quite remarkable comeback at the age of 35.