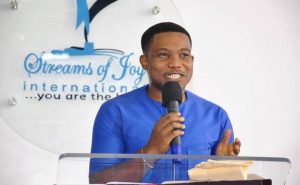 “And Elisha the prophet called one of the children of the prophets, and said unto him, Gird up thy loins, and take this box of oil in thine hand, and go to Ramothgilead:” (2 Kings 9: 1)

Elisha told the son of the prophets in our Focal Scripture to gird up his loins. In bible times, when a person was told to gird up his loins, it meant to tuck in one’s flowing garments into a girdle worn around the waist. Usually, the next thing to do after girding up one’s loins, was speedy movement. So what was about to be done for Jehu was to be done with speed. The matter of Jehu was such that required urgency.

If there be a pattern of slow movement or slow advancement, today, I command it to break by fire. I command the power of delay to be broken over your life. I command every voice that is slowing down your destiny to get out by fire. The Lord moves you from the slow lane to the speed lane. The Lord moves you from the list of those to be delayed to the list of those that will be favoured early. Speed is restored to your life.

No longer shall the matters of your life be delayed. Wherever you were once delayed, divine speed is restored.

Psalm 90: 14 says: “O satisfy us early with thy mercy; that we may rejoice and be glad all our days.”

Declare With Me: The matters of my life are moving from the slow lane to the speed lane, in Jesus’ name!

Streams of Joy Devotional 22 July 2021 Message by Pastor Jerry Eze; is the dynamic Founder and President of the fast-growing Streams of Joy International. A seasoned Pastor and leader, a consummate conference speaker and leadership coach. The work of ministry have taken him to major platforms around the world

Streams of Joy Devotional 8 June 2021 By Pastor Jerry Eze, Tuesday Message Topic: No Reduction Focus Scripture: “And when he was come out of the ship, immediately there met him out of the tombs [Read More]

Streams of Joy Daily Devotional 22 June 2021 By Pastor Jerry Eze, Monday Message Topic: You Can’t Be Stopped Focus Scripture: “But when he saw Jesus afar off, he ran and worshipped him,” (Mark 5: [Read More]