Twist of Fate 13 December 2020 Update starts as Sarla calls Pragya and says she is very happy today as Tanu has left from their lives. Janki takes the call and says they will come to her house. Sarla asks Pragya to visit temple and make mata rani wear chunari.

Tanu is stepping down the stairs and thinks about Abhi. Tai ji asks Mitali to give money as she is leaving. Mitali says she don’t have money right now. Tanu hears them..Mitali thinks she is inauspicious to make me lose. Tanu thinks about Aaliya and misses her. Abhi sees her and calls her. Just then Tanu looks at him and falls down the stairs. Abhi and Pragya rush to her. Pragya asks Raj to call ambulance. Abhi asks Tanu to open her eyes, and gives water. Dadi asks Abhi not to worry.

Nikhil thinks he has to do something to break Abhi and pragya’s relation. He thinks what to do? Shall I kidnap her…then think whereever she is in trouble, Abhi saves her like a hero. He thinks to give her injection to make her fall in coma. He thinks if he has lost from Pragya, and thinks about her. He gets Pragya’s call.

Pragya informs her that Tanu has fallen down the stairs while stepping down. Nikhil says someone might have pushed her. Pragya says nobody has done anything and asks him to think about his responsibility towards his baby. He says you are baby’s father and that’s why I am informing you. Nikhil thinks if something happens to baby then Tanu can’t marry Abhi and my dream to become CEO will fail.

Pragya tells Dadi that Tanu has fallen down in our home and that’s why she is responsible. They rush her to hospital. Abhi tells Doctor to save Tanu and her baby. Doctor says he will do the needful. Nurse asks Abhi to fill the form and asks about baby’s dad name. Abhi tells his name. He thinks baby is mine, and nothing should happen to him.

Nikhil comes to hospital and thinks if this is Pragya’s trick to frame him. He thinks I will not go inside, and then her plan will fail and then she will come to know what I am. Then thinks he thinks to check out Pragya’s plan. Mitali thinks if Tanu is acting or doing drama. She thinks she has won the bet and tells Tai ji. Tai ji says I will never bet with you. Dasi asks about the bet. Mitali tells she has won. Dasi scolds them.

Purab tells Raj and Akash that Abhi might be feeling guilty. Akash says Abhi is emotional for the child. Rachna is sad and says don’t know why this has happened. She says everything has changed. Purab asks him to say clearly. Rachna says if Tanu acted like Dadi, so that she couldn’t stop at home. Raj says she is a mum and will not harm her baby intentionally. Akash says knowing that Abhi will marry her only for the baby.

Pragya thinks Abhi couldn’t see Tanu’s pain. She sits beside him. Abhi says you said that you will support me like a friend in every situation, and says I need you. He says my baby’s life is in danger because of me. May be Tanu got shocked when I call her, and slipped. He says my baby didn’t get my name and may be life also. He feels guilty. Pragya tells Abhi that nothing will happen to baby.

Pragya says you have taken good care of baby when he is not ……just then doctor comes and scolds Abhi holding him responsible for Tanu’s condition. He says they would have done premature delivery, but it is risky for both mother and baby. He says Tanu was crying badly when I asked her how she fell down..He asks him to take care of his wife. Abhi looks on. Pragya hears him. Nikhil also hears doctor’s advice and scolding. Doctor says we have shifted her to private room and asks him to consult psychiatrist for her.

Pragya thinks she was about to tell him about her truth. Nikhil thinks he shall hide before Abhi sees him. Purab asks what happened? Nikhil hides. Abhi tells Purab that Tanu got consciousness and he is going to meet her. Purab doubts on Tanu. Pragya thinks Tanu might trap Abhi and thinks to go. Nikhil comes infront of her and says you called me here to trap me.

Nikhil blaming Pragya for calling him to trap him. Pragya says she has informed him as she really cared for baby and called him as he is his father. She says she feels pity for baby as her mother and father don’t care about him and have only used him. Nikhil says very soon you will be at Tanu’s place. He says Tanu will get Abhi’s sympathy and will stay in his house. Abhi will get emotional about the baby which is mine.

Pragya says your baby is fighting with life and you are thinking about using him. She says I feel disgusted to talk to you, and goes. Abhi is with Tanu in the ward. Nurse tells Tanu that you are very brave and have fought with life to save the baby. Abhi feels guilty and tells Tanu that he and his family are with her. Tanu thinks I want to see Pragya’sface now, and thinks she has won. Pragya thinks Tanu has won and I have lost. Sarla comes.

Pragya tells her that Abhi is feeling guilty and blaming himself for the accident. Dadi says yes, and says I would have told him not to bring her home. Sarla says her destiny is good. Dadi says Abhi will not look at her and asks Pragya to have patience.

Mitali asks Dasi to have coffee etc. They go. Abhi apologizes to Sarla and asks her to punish and slap him. Sarla says I can’t. Abhi says you can raise hand on your son naa. Sarla keeps her hand on his head and says I wish all mums get son like you. They get emotional. Mitali comes back to tai ji and she has locked Dasi in bathroom. She laughs and asks her to bet with her. Tai ji asks who will win? Tai ji asks her to think?

Mitali thinks I will take Pragya’s side. He says I have full confidence that Pragya will not let Tanu come home. Tai ji says Tanu will come home and will trouble Pragya. They bet. Tai ji asks her to open the lock.

Tanu is acting and thinks it is tiring to sit on the bed. She acts thinking Abhi came. Nikhil comes to her room and says he was eagerly waiting to see her. Tanu says you didn’t come in the morning. She asks why did you come here and refuses to take his help. She says I have done accident acting to help myself. Nikhil says what did you say? He laughs and asks how did you act? Tanu says I was worried and an idea struck to my mind.

A fb is shown, Tanu thinks she shall fall down the stairs and get sympathy. Just then she sees Abhi coming and falls down. Nikhil asks what you have done? He says if anything had happened to this baby then I would not have become CEO. He then praises her for handling the situation well and says you are suitable to become my baby’s mum. Tanu says but you are not suitable to become my baby’s dad.

Abhi and Pragya have vada pav…Pragya looks at Abhi. They make each other have it. Kaisa yeh ishq hai plays…Pragya gets hiccups. Abhi asks do you want wine, then says juice or water. He goes to bring water for her. Pragya drinks it. She says vada pav was so spicy, why did you make me eat knowing I don’t eat spicy things. Abhi says you brought it. You should thanked me for sharing vada pav with you. He asks where to sleep. Pragya asks him to sleep on her shoulder. Abhi rests on her shoulder. Kaisa yeh ishq hai plays again.

Abhi gets up and says he has to give medicine to Tanu. Pragya asks him to sleep and says she will give medicine to her. Abhi says but how I will sleep? Pragya gives him pillow. Nikhil and Tanu laugh on Pragya and Abhi. Nikhil says Pragya gave lecture to him.

Twist of Fate 13 December 2020 Update ends as Tanu says Pragya will be shock if she comes to know that I have acted. Pragya hears their voice, comes inside and claps. 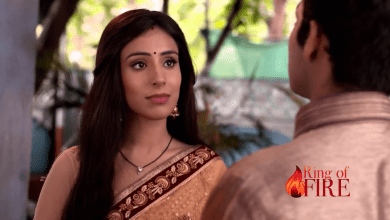