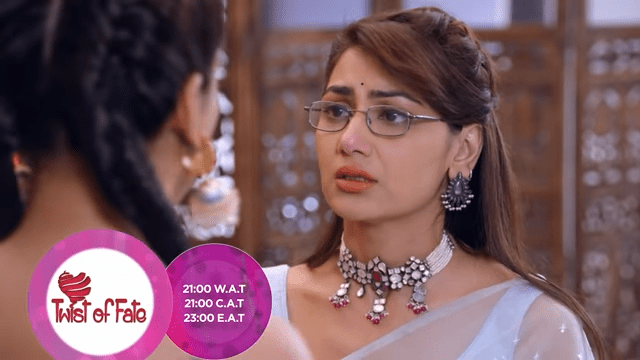 Click To Read Previous Update on Twist of Fate

Twist of Fate 21 June 2021 Update starts in the room Shahana wakes up Prachi, teasing that she proposed Ranbir and he said a no. Prachi was irritated and says that Ranbir actually proposed her, and she said a no. Shahana runs outside and tells the family.

Pragya and Sarita ben were excited too. Sarita Ben asks why she didn’t tell them about the proposal, and urges Pragya to call Ranbir’s family and fix a date for their wedding. She dials the number herself, and Pragya considers her as the elder. Sarita Ben speaks on phone about Prachi and Ranbir. She comes to know that Ranbir told his family already, and they are coming for Roka. Prachi was hit by pillow on her face, and realizes that it had been a day dream. Shahana asks where she got lost. Prachi changes the topic. Afterwards, Prachi silently thinkss she won’t tell anyone about Ranbir’s proposal, otherwise they will get her married.

Ranbir comes to Abhi’s room. He requests Abhi an advice. Abhi looks skeptical, and senses it’s a matter of love and heart. Ranbir was impressed. Abhi says he has gone through all such times in life, when matter of heart become matter of life. Ranbir tells Abhi that he confessed his love to the girl he likes. Abhi says it’s good. Ranbir says there is a problem. Abhi silently thinks that its same with every love story, the guy comes to girl’s father with his problem. Ranbir was telling Abhi that she reacted quite aggressively and went home without any positive response. Abhi thinks this is the reason, Riya flew for a holiday. He tells Ranbir he is trying to figure out what’s wrong. It’s normal that she didn’t react the way he expected.

Girls are different, and whenever it’s about proposal, they are nervous. Ranbir was relieved that Abhi says she will come back. He will now sleep calmly. Abhi assures he will fulfil all his dreams, and advices him to use sanitizer before sleep. When alone, Abhi thinks that Riya is after him, but Kiara wasn’t only after him; she was his xerox.
There, Pragya sat with a photo of Kiara. Sarita Ben comes to the room and realizes Pragya seemed upset. She turns to leave.

Pragya offers Sarita Ben to sit. She shows her the photo of her elder daughter, Kiara. Abhi also sat with Kiara’s photo and kisses it. Sarita Ben complements that Kiara is beautiful. Pragya smiles that Kiara was the one who made her mother for the first time. She never thought of living without her, and now years have passed. Sarita Ben says now Prachi is her life. Pragya recalls that Kiara was a xerox copy of her father. She loved the Holi festival, was mischievous and always naughty, and demanded a different lunch all day. She cries missing Kiara.

There, Abhi also recalls all the moments he had spent with Kiara. Meera who had come to the room says all of Abhi’s daughters look like him. Abhi laughs that he has spoiled Riya. Meera asks if there is something in Riya, that resembles Pragya; she has never met Pragya. Abhi tells Meera that Prachi is like Pragya, not Riya. Meera asks how? Abhi says there is Pragya’s reflection in Prachi, if she meets Prachi; she is like Pragya. Though, nobody can be like Pragya. It feels strange that he isn’t talking about his own daughter, and instead discussing someone else’s daughter. Aliya comes outside the room and smiles that at least her brother is happy with Meera.

Vikram comes home with a head ache. He demands Pallavi a medicine. Pallavi says she told him there would be a hangover if he drinks. Vikram asks when she said this. She had no reply now. Ranbir comes there and complains to Pallavi that dad is always scolding Anita on phone. Pallavi was insecure and asks who Anita is. Vikram explains to Pallavi that he only scolds her for calling him pointlessly, then asks Pallavi if she had given birth to his enemy. Vikram throws a cushion towards Vikram but it feels near the door. They were shocked to see Maya’s parents there on the door. Vikram and Bee ji were unhappy, while Pallavi and Ranbir welcomes them.

Maya’s mother was appreciative of their open mindedness, as their whole family drink and even offered their daughter a drink. Maya goes to greet everyone, and was even ready to touch Ranbir’s feet. Her father gives Ranbir time of 2 pm for mall, as they have to do shopping for their Sangeet. They leave.

At home, Shahana demands Prachi all the change money she got. Prachi gets a call from Ranbir. Shahana was inquisitive why she doesn’t pick up the call. There, Ranbir was also restless and wish that she picks up the call.

Shahana asking Prachi to pick the call. Prachi says she don’t want to talk to him. Ranbir thinks why is she not picking the call. Prachi rejects the call. Ranbir thinks she rejected his call. Shahana says he will call again. Ranbir calls again. Prachi switches off her phone and goes out locking the door. Sarita behen tells Prachi that she did right to lock her in the room. Shahana says I am hearing everything. Door bell rings. Prachi opens the door and finds Ranbir standing. He asks why you have come here? He says he came to take her. Sarita behen asks Ranbir to sit and says she will bring tea. She asks how much sugar he will take? Ranbir says 4 spoons. Shahana asks which Ranbir came, our Ranbir or Ranbir Kapoor. Prachi says our Ranbir.

Ranbir looks at her and recalls their moments and conversations. Tujhse milta rahun main plays…Shahana smiles. Prachi says Ranbir Kohli. Shahana asks her to tell your Ranbir. Prachi says yes, my Ranbir and says she is a headache. She unlocks the door. Shahana comes out and hugs Ranbir. She tells that they were about to torture her before you have come. Sarita behen asks them to talk and asks Shahana to come with her.

Prachi tells that she don’t want to talk to him and asks him to go. Ranbir comes back again. She pulls his hand. Ranbir asks her not to try her strength. She leaves him and he falls. He asks Sarita behen why Prachi is bitter. Sarita behen talks to Shahana and tells that when there is no argument then it is not love.

Maya comes to her mother and asks how is he looking? Mrs. Chaubey says you are good. Maya insists to go to mall. Mrs. Chaubey asks if she wants to meet someone and tells that first love is difficult to get and you are lucky. Maya says yes, I am.

Ranbir closes the door. Prachi says you will say that you don’t remember anything. Ranbir asks are you upset that I propose you? Yes/No. Prachi says you remember. Ranbir says why you are upset? That I proposed you or that I remember. Prachi says there are many reasons and says I know you, that’s the reason. He keeps finger on his lips. Prachi asks him to say something. Ranbir asks her to calm down and tells that he loves her. Prachi looks at him. tujhse milta raho main plays…..Ranbir says yes, I love you Prachi. Prachi says tell anything, but don’t say this. Ranbir says what else I will say and says you are so good that I fell in love with you.

He says you are so beautiful that I couldn’t keep my eyes off you, what is my mistake. He says it happened, and falling in love with her is the most amazing thing in his life. He says firstly he used to think that he is good, now he is more good falling in love. He says I had football in my life, now you are also in my life. He says I just want to look at you. Prachi looks at him. Song plays again. Tujhse Khoya rahun main…..Prachi turns.

Ranbir asks her not to get scared and says as I love you, that doesn’t mean that you shall love me. He says I am not forcing you, don’t change yourself, take out your anger on me, asks her not to force him not to stop loving her. He says when I am with you, I feel special. I just want to live with you all life and wants to handle your problems. He says if you love someone else then also I will be happy for you. I will be with you always even if you love someone else. He says he is serious.

He says he is not stupid and don’t want her to leave him. He says I am not suitable for you, you need someone special. Prachi says what a relieve. I thought that you will force me to say I love you to you. I would have gone far from you.

Ranbir recalls telling Aryan that he wants her to be with him, and will take her in comfort zone and will not force her to love him. If she doesn’t reply to him then also I will not force her. Aryan asks if she don’t love you. Ranbir says I can bear if she don’t love me, but can’t bear to see her going far from me. He says she is my first love and I will do it without hurry. He says I just want to be a good boy infront of her. He says I will not try, but just hope that she loves me. Fb ends. Prachi asks what are you thinking?

Ranbir says I know you will help me, as Maya and her parents are coming to take me to mall for shopping. He says they want to make me dulha. Prachi says she will not make any plans this time. Ranbir asks her to go with his plan and come with her to the mall. They reach the mall. Ranbir says I wants to win your trust and says I love you. Prachi says I don’t want to answer you, you are repeating again. He says this is not truth, but we have to show this to Maya’s family.

Twist of Fate 26 May 2020 Update starts with Abhi thinking Dadi isn’t saying anything about Pragya. He thinks Dadi trusts his sayings. He thinks they will have go separate ways. He tries to look [Read More]