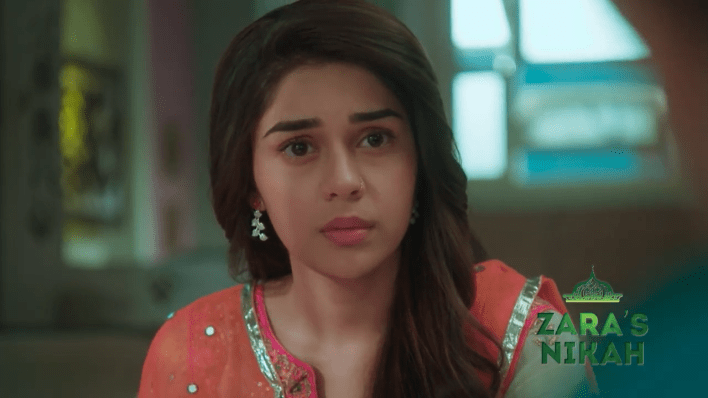 Zara’s Nikah 12 December 2020 Update starts as a man comes to Kabir and says some girl came here to meet you, says she is Ayesha’s daughter. Kabir says Alina came here? He comes out of mosque and puts hand on eyes of girl. Girl turns and its Zara.

Kabir calls Shahbaz and says Zara came here and promised to celebrate eid with Ayesha, why she is doing this? Make her remain away from me as otherwise everything I did will be for nothing.

Shahbaz thinks Zara is trying to comeback in Kabir’s life through Ayesha. Shahbaz comes to Ayesha and shouts at her that why she is throwing Zara at Kabir? He doesnt want her, you have to stop this Zara’s drama. Kashan comes there and says I called Zara here, she was worried for her and asked to meet Ayesha so I helped her. Zeenat says he lied to me. Shahbaz says you are working behind me? listen to me carefully, that girl should not be here anymore. He tells servants that Zara should not be seen here anymore otherwise you will lose your job. He says I dont want Zara’s shadow near Kabir.

Nussu says to Zara that I am missing Amaan and his mother doesnt want him to talk to me. Zara says God will make you play with him soon. Nussu gets happy.

Zeenat comes to Zara and shouts at Salma for sending her daughter to her house. Zara says talk to me, Zeenat says you are shameless, you keep coming to our house, Shahbaz had a fight with Ayesha because of you. Think about Kabir only, you made his life hell, you came to our house without invite, you have no respect. Zara says I am daughter of that house.

Zeenat says that is my house, I will see how you enter that house again. She leaves from there. Irfan is tensed. Zara tells Irfan that Zeenat is like this only, dont worry. Irfan says till when you will keep getting insulted by going there? This should end here.

Salma says you should end this relation. Azra asks her to forget Kabir. Mina says you need counseling again, you are just getting pain. Zara says my own family doesnt understand me, I cant break hearts of my own people, we have feelings, Ayesha have relation with us, I got separated from Kabir but I have relation with that house, I am part of that house, I dont want sadness in that house on eid. Irfan says I agree with you, reunite Kabir and Ayesha

Ayesha is in car with Zara. She recalls her meeting with Kabir and cries. Zara is worried. They come home. Aysha says to Zara that I am not miffed with you but dont do this again. Zara says forgive Kabir, celebrate eid with him.

Ayesha says he broke your heart but he gave himself pain for life too, he brokedown without you, I saw him dying this year, his happiness is with you, he broke his and my heart by leaving you. She leaves.

Kabir recalls Azra’s words that he didnt even pick Zara’s call when she needed him most. Kabir comes to Shahbaz’s house and says Irfan had heart attack and nobody informed me? She was trying to connect with me for reports but someone switched off my phone and Zeenat didnt let her in? did you know about this? answer me? Shahbaz is tensed.

Zeenat comes home and says to servant that tell me if Zara came here? Servant says nobody came here. Zeenat says Ayesha is sleeping so I will check my diamond rings. She goes to her room and says free things are so good. She recalls her moments with Ruksaar how she used to share her free things with Zeenat. Zeenat says Ruksaar.. I miss you so much, you would be so happy to see all this, dont worry I am coming to meet you. She leaves.

Zara is in car. Azra says dont think about Kabir, dont melt for Kabir listening to Ayesha, we will be miffed if you get distracted for him. Zara says I didnt melt for him, my heart has become of stone for him, I am not a fool but I promised and will make Kabir and Ayesha reunite. I know a way.

Zara’s Nikah 12 December 2020 Update: Zara and Azra come home. Zara says to Irfan that I want to announce a condition for sharia board members on eid.

Shahbaz says to Kabir that I switched off your phone that night because you were crying and Zeenat was worried for you too, I didnt want you to become weak that night for Zara, we didnt know about Irfan, forget about everything. He says you are back in sharia board. He shows him sharia board head chair and says my dream is to make you sit on this chair. Kabir says I am not interested in this chair, this place took my life from me, I dont need anything from this place. He leaves meeting room.

Zara comes to sharia board and recalls how she had a fight with Kabir and how she got shot. Kabir is walking in corridor too in daze. He sees Zara and look down. He says you here? you became member again? Zara doesnt answer him and leaves.

Zara meets Shahbaz in meeting room and says Irfan has given new order for eid celebrations, all have to bring their families in eid festival. Shahbaz says why are you doing all this? you forget Kabir, you cant get him, forget him, he doesnt want you anymore, this wont work. Zara says Kabir has to come, this is sharia board order and you are part of it, if he doesnt come then you will be insulted. She leaves from there.

Zeenat comes to hospital and meets nurse. Nurse says you didnt tell us you are coming? Ruksaar doesnt want to meet anyone. zeenat says tell her that I won a diamond ring, call her. Nurse is tensed and goes. Nurse says to doctor that she will meet her for sure today, how will we bring Ruksaar?

Shahbaz comes to Irfan’s house. He gives him flowers. Irfan sits with him. Shahbaz says national sharia board has ordered to cancel eid festival of sharia board. Zara is shocked to hear that.

Shahbaz tells Qazi sahib that he got a permission from the President of National Shariah Board that due to the recent Heart Attack Qazi Sahib suffered from, the Eid Festival has been cancelled. He complains that no one told him about it, only Azra came to inform him about his ailment and he requested the President for cancellation. He asks Qazi Sahib that Zara must have arrived in the Festival in tears, his son must have disgraced her again; this kept their family’s respect. Zara reads a verse ‘He gives respect to whosoever He likes; and disgraces whosoever he wish’. Eid festival will take place.

Qazi Sahib counts in front of Shahbaz that he didn’t teach his son values. His son may learn these values from Zara who is trying to hide the mistakes of a person who disgraced her in front of the whole society. The eid celebration preparations are complete, and Zara has taken the responsibility. Shahbaz argues the festival can’t take place without the permission of president, who has left for Dubai for Eid.

Zara shows an email from the President, who had cancelled the orders of cancellation of festival. She had been selected the Chief Organizer of the festival. Shahbaz turns to leave. Qazi Sahib tells Shahbaz to write an apology for interfering in the matters of Shariah board without consent of City Qazi. Zara tells him about the theme, ‘Come with a Clear Heart’.

Zeenat comes to meet Rukhsar. The doctor tells Zeenat she can’t meet her sister, Rukhsar’s mental condition isn’t sound enough to meet anyone. Zeenat cries and says this can’t be possible, they doctors must be lying to her that Rukhsar doesn’t want to meet her. The doctor requests Zeenat not to disturb the emotional state of Rukhsar. Zeenat sense something was wrong and deters to complain in the police. She says she will come tomorrow with clothes for Rukhsar. The hospital staff was worried where they will bring Rukhsar from.

Shahbaz tells Kabir that he can’t avoid Zara tomorrow. Kabir tells Shahbaz he can’t let Zara win, he will do anything to abstain from her.

Azra and Zara come to make up the mood of Zara’s mother. Zara convince her to accept Ahmed family as their friends, and not relatives anymore. Zara’s mother says she hates Kabir after all the drama. She will go to Eid Festival only for Zara, but she won’t bear her insult again.

Kabir comes to Molvi Sahib, who gives him Zakat. He gives responsibility of its distribution to Kabir.

Zeenat cries that her sister doesn’t want to meet her. Her husband promises he would accompany her to hospital to meet Rukhsar. He leaves, giving Zeenat the task of finding diamond in the boxes. Zeenat looks into the boxes one by one.There, Zara enjoys with the family as they prepare for Eid Festival décor.

Zeenat cries as she doesn’t find a single diamond.

Azra asks Zara what she must do with the phone. Zara tells her to take it to festival. She hold bangles from a basket. There, Kabir also watch a couple buying bangles for Eid. Both were lost in each other’s thoughts. They day dream of being together, Kabir chasing Zara playfully. He finally grabs her by arms, shuts her eyes and gifts her a set of bangles.

Zara’s Nikah 12 December 2020 Update ends as Zara asks him to put it on.One of the man in the street taps Kabir’s shoulder.