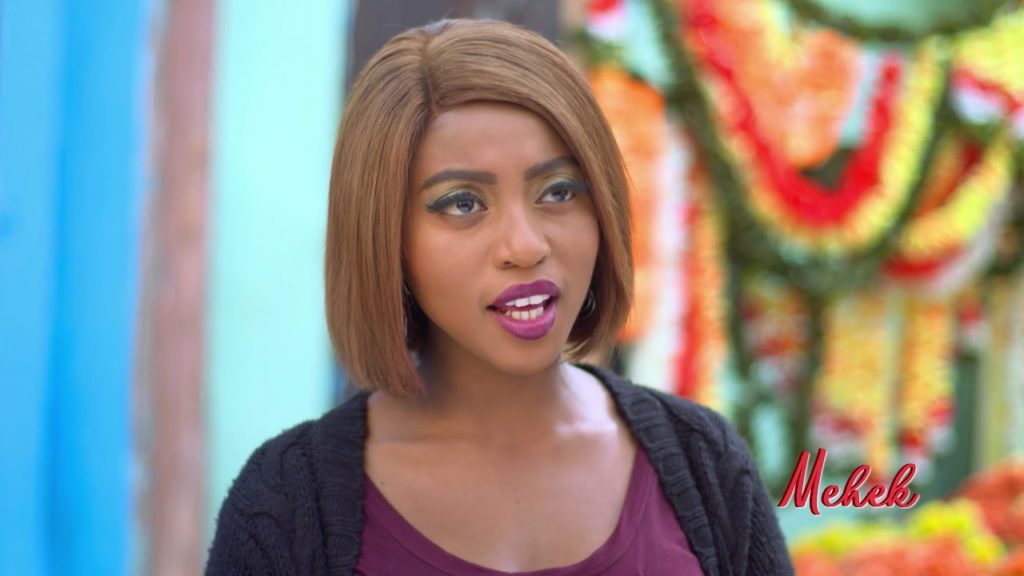 Mehek 24 August 2019 Update – Shaurya dances with Mahek. She sees flash backs. Shaurya says Mahek can you listen to me. Archie says to Mandhar see there, that’s Mahek. Mahek faints on Shaurya. Mandhar stands up. Archie says control your anger and do what I say. He says what to do? Shaurya says please mahek try to recall. She looks at him. Mandhar claps. He says wow what a party. You dance with other people’e wives here. He grasps Mahek’s hand and says if you have ruined my dignity then come with me.

Mahek says the one who has thief in heart says things like these. A girl was calling you last night. I have her number as well. Shaurya says give me that number. Neev says I have that number. He gives it to Shaurya. The phone rings the hall. Everyone looks here and there. A woman says I am nisha from jewelry store. I have been calling you since night. Mahek says you called my husband? She says oh for you he got this made.

Mahek says you called at night? Jeweler says yes thee price was more than your budget. Mandhar says wanted to give you on our anniversary. But you are here surprising me. He makes her wear it. He hugs her and says remember what I said at wedding night. I am like coconut hard from outside but soft from inside.

Shaurya shoves him and says don’t dare touching Mahek. She is mine. Mahek says to Shaurya stop it. She says to Archie you said that nothing like this would happen here. You pay our father’s bills so you can do all this. I don’t need your favors. Stay away from me. Stop insulting my hisband and my family. They leave. Karuna says I asked you not to do this. Archie says I asked you not to do all this Shaurya. Karuna leaves in anger.

Kanta says to Shaurya its getting more difficult. Shaurya says he is my Mahek and she will come back to me, I will keep trying. I can’t see Mahek near that cheap man. He is disgusting. Why don’t everyone understand. Archie says because everyone thinks she is Vandana. For Mahek that is her family. You can’t just force her to come to you. You have to do is smoothly. Archie says don’t do this mistake again. We are here to help you but you have to control yourself.

Mandhar recalls what Archie said to deal mahek with love and win her heart so she will never think about Shaurya. He puts his arm around Mahek. She feels awkward.
They come home. Julie asks how was the party? Neev says it was fun. I had so many ice creams but ma and papa fought. Papa gave a gift to ma. They became friends. Shaurya recalls Mandhar near Mahek.

Julie asks you gave her gift? He says this is a key. Dad was outside her room as a guard. Now when he is on bed I think I celebrate my nights with her. Shaurya is worried for Mahek.

Mandhar says to Julie that I am stuck with Mahek now so I might as well have marriage night with him. Julie is disgusted and says I dont know to hate you or myself. Mandhar says it will be consummating night
Shaurya is in his room and feels restless. He says why I feel something wrong is happening.

Archie calls Mandhar, Mandhar tries to move away from Julie but she stops him and says I wont let you do this sin and Mahek doesnt deserve this injustice. Mandhar shrugs her off.

Shaurya calls Kanta and says can you visit Mahek? I feel something bad is going to happen. Kanta says I cant visit right now, Shaurya requests her, she relents and says okay I will go.

Mandhar comes to Mahek’s room and goes closer to her, she feels uncomfortable, he tries to lean in. Mahek says what are you doing? Kanta is trying to leave Sharma house to go to Mahek’s house. Jeevan stops her and asks where she is going?

Mandhar tries to pull Mahek closer and says he was away from her all the while and tries to kiss her. Suddenly they hear Neev coughing loudly. Mahek pushes Mandhar away and runs to Neev who is heaving for breath, she asks Mandhar to call doctor but he doesnt move.

Kanta says to Jeevan that I am not going anywhere, you go to sleep. Mahek comes to Sharma house at night. All come there and asks who is there? Mahek comes inside and cries, she says Neev is very ill and even medicine is not affecting him, please do something. They all run to Neev.

Julie is trying to give medicine to Neev, Neev is coughing up badly. Mandhar says why cant he die? Mahek comes there with Sharma family. Ravi calls doctor but he is not taking call. Mahek cries and says we have to do something, Kanta says only oner person can help, Mahek says do anything but save Neev. Kanta says okay, she sees Shaurya’s call and takes it.

Doctor checks Neev. Shaurya is there too. Doctor gives oxygen to Neev and says he has Asthma and ate cold food thats why got ill, Mahek says its all my fault. Kanta says dont blame yourself, kids do these kind of things. Shaurya asks doctor if there is anything to worry? Doctor says no I have given medicine, he will be fine. Mandhar thinks my own son destroyed everything. Doctor leaves.

Shaurya sits beside Neev and says junior hero will be fine till tomorrow. Shaurya says to Julie that if you need anything then call me, I should leave. Mahek shyly looks at him. Shaurya leaves. Mahek sees him going. Shaurya comes out of house, Mahek comes there and says listen.. Shaurya stops in his track and looks at her.

Mahek says I misbehaved with you and you still helped us, I am sorry for my behavior, please forgive me and also thank you for helping. Shaurya smiles and says its okay, I will come to meet Neev tomorrow. He leaves happily. Mehek 24 August 2019 Update

Mandhar comes to Archie. He says to Archie that I dont have patience, I want to find out solution. Archie ignores him and plays with cat. Mandhar says listen to me. Archie says my baby is hungry. Cat attacks Archie, Archie says I gave her milk and she attacked me? bye bye.. I will miss you, she suffocates cat with pillow, even Mandhar is shocked. Archie asks servant to bury her and put tree over her grave.

Archie says to Mandhar that people remember me when they want solution as I am psychologist. Mandhar says what rubbish are you saying? Archie says dont shout, when I wanted to talk you didnt come and now you are begging here? Mandhar says I want to get rid of this Shaurya. Archie says I have told you to not use tongue and hands but your mind, I know you dont have mind so I will use mine, get preparations of marraige done, there will be wedding in two days.

Mandhar says whose? Archie says yours and Mahek’s wedding, you have to show her that she is yours, tell her that you want to repeat marriage promises, want to take pheras again, marriage have strange affect on girls, they start loving husband and soon Mahek will be wiped out after this wedding and then you can have marriage night with you, she will forget ervything and will be yours. Mandhar says you are amazing, I want to make someone my teacher for first time. He leaves. Archie says Mahek will become Mandhar’s and I will get Shaurya. Mehek 24 August 2019 Update

Mahek says to Neev that you have to drink kadha, he says I wont, its bitter. Mahek says doctor challenged me that Neev wont drink kadha, he said I will lose challenge. Neev says no you will win challenge, I will drink it, he drinks kadha. Mahek hugs him. Shaurya and Kanta comes there. Julie says see who has come to meet you Neev, Shaurya says hi Neev. Neev hugs him. Mahek greets Kanta and asks how are they? Shaurya keeps staring at him and thinks how can I be without you? I want to hug you and cry but I cant even do that. Mahek looks up at him but then looks down.

Shaurya says to Neev that I have brought surprise for you, close your eyes. Neeb does. Shaurya brings out gift box and makes glasses and hat, he makes Neev wear it, Neev jumps up and down and says yay I became hero, take my photo. Mahek says dont irritate them, I will take it, Neev says not hero will take it. Shaurya takes Neev’s photo and shows it to him. Mehek 24 August 2019 Update on Zee World

Neev takes his phone and thinks I should send them to Mom’s phone, he starts sending photos. Mandhar comes there. He glares at Shaurya. Neev says see papa, they brought gift for me. Mandhar says you all love my son a lot thats why came here early, wow neev son, I pray that you get more people like them. Mehek 24 August 2019 Update

Neev asks Shaurya to tell him a story. Mandhar says to Neev that you want go roam around city today? He says to Mahek that we have been in troubles here, dont make food today, we will eat outside, he puts hands on her shoulder, Mahek is shocked. Shaurya glares at Mandhar and thinks what this cheap man is planning now? I have to find out.

Mandhar says to mahek don’t cook today. We will go out today. Mahek says you and Neev go. he says why won’t you go? She says dad is not well. He says so what? You look so tired. Shaurya and Kanta leave.
Dolly gives Archie food and says taste it how it is. Where is shaurya? Archie says he left in morning. Karunna says you care so much for me. If there was another girl she would have left. Archie says can we through a party for poor kids? Its my mom’s birthday. Karuna says we will do that for sure.

Neev orders from Mahek’s cafe. Shuarya is there as well. Shuarya says to Kanta mahek here? She says he brought them here. Her memory is coming back. But you need to control yourself. Archie texts mandhar and says why you came here? He replies Mahek brought us here. She says do as i say. Mandhar says Vandana order what you want. Neev says I will order. Neev says shaurya you come and eat as well. Mandhar says yes come. You come anywhere.

Mehek 24 August 2019 Update on Zee World – Archie says shaurya lets eat. They both eat as well. Jevan says ask shaurya not to do any mess here. Mandhar asks Mahek to make him eat. Shaurya starts beating him. He says mahek you are mine. She says stay away from you. Are you mad? I am not Mahek. I am Vandana. Mandhar says we shouldn’t have come here. Mahek says don’t ever touch me again.