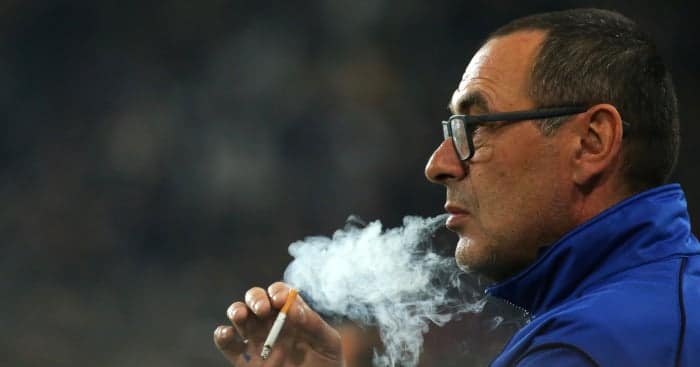 Serie A: Juventus battle to save Sarri from coronavirus

Italian giants Juventus are currently putting manager Maurizio Sarri under a special protection regime after the coronavirus outbreak continues to create havoc in the Serie A club.

Two Juventus players – Blaise Matuidi and Daniele Rugani – have tested positive for COVID-19 over the past two weeks, which has resulted in 121 players, staff and officials of the club going into self-isolation this week.

While Sarri has tested negative for the virus after players and officials from the Serie A club took a second round of swab tests this week, the former Chelsea manager’s health is under serious risk due to him being a regular smoker.

This means that the Italian is more exposed to serious health risks as those with lung problems, alongside other long-lasting health issues, could face greater difficulty in healing.

Sarri is known to smoke up to sixty cigarettes a day and also suffered from pneumonia at the start of the 2019-20 season. This illness, which reportedly left him very scared about his health, prevented him from managing the club from the touchline last August and during the first half of September.

With the help of the Juventus medical staff, he was able to make a full recovery and continues to receive special advice from the same set of people about steering clear of any serious coronavirus-related health issues.

Close friend Aurelio Virgili, who has known him for more than 20 years and worked with him while Sarri worked as a banker in Arezzo, revealed he has been in contact with the Juventus manager over the past few days.

He told Tuttosport: ‘I spoke to him three days ago. He’s in a positive mood.

‘He misses daily life and being in the training ground – it’s in his blood. But, as is the situation for everyone, he’s concentrating on the type of work you can do at home.

‘He’s watching matches, training sessions and is studying player data. He’s like a machine. For example, if you asked him how many kilometers Ghimmi [Juan Cuadrado] registered against Inter Milan, he would tell you how many kilometers he ran forward, backwards, left and right.’