Lies of the Heart 6 August 2020 Update starts as Asha keeps ranting of her grief about Gaurav’s betrayal and infidelity to urmi, while she desperately asks her to calm down and have some trust on gaurav, as that shall bind the relation together.

Asha retorts that she too had trusted samrat, then what she got, and reminds her of his infidelity and places gaurav in the same shoes. She says that urmi had left but she doesnt even have that choice, since she is illiterate. urmi says that she is wrongly comparing. She says that she remembers samrat but not ishaan, and asks how can she compare gaurav to samrat, and points out all the atrocities that gaurav didnt put her through, and she keeps denying it all. urmi asks her not to compare samrat to gaurav. Asha then smiles finally. urmi is tensed still.

They both walk on the road, where asha spots gaurav’s car and understands that he is around and gets excited. they notice him at the saree store. But then they find that he is seeing the secretary, choosing sarees. asha is apalled while urmi is boggled as to whats going on. urmi herself is shocked to see this. Asha confirms her worst fears, and asks urmi if she shall still defend her brother. Urmi stands speechless.

Seeing tani nin the room, damini and sandhya get on with their preplanned motive. They ask if she is busy. tani says that she is just reading a magazine. damini says that they are cleaning all wardrobes, and putting napthalene balls. tani says that it isnt needed but they insist. she complies and gets to reading the magazine, while opening her almirah. they then ask her to open samrat’s wardrobe too. tani says that he doesnt like it, if anyone touches his stuff. damini however insist on cleanliness, and tani opens his wardrobe too, taking the keys from undder his pillow.

They put napthalene balls, and then find that his locker is locked. tani asks if this can be avoided, as he keeps his personal stuff there. tani again says samrat wont like it. they keep insisting, saying that its for cleanliness only. tani finally gives in. Sandhya asks her to divert tani, while she takes the imprint. damini then gives the balls to tani, asking her to put it hserself in samrat’ wardrobe. sandhya gets the work done, and then they both walk out feeling victorious that they shall now have accesss to samrat’s locker. They are overjoyed.

Samrat puts kiran at ease in his car, as he gives her a lift after the workout. He points out how their lives are incomplete, and how they have to find happiness in something or the other in life. She is tensed. He indirectly tries to point out, how being with her, makes him happy, but that doesnt mean he doesnt love his life, but just trying to pull himself out of the grief, through a reason. he asks her to keep searching for a reason to live on happily. Just then, he gets tani’s call, and gets tensed. she asks how can he take her car vwithout asking her first.

He fumbles while she reprimands him. he fumbles again, while she asks him to come home straightaway. he asks if he can take sometime. He apologises. She says that its not a problem. He then helps her out, and gets her stuff too, and then again profusely apologises, while she keeps maintaining that its okay. he gets in and drives off. inside, he is frustrated and angry at tani’s dictatorship, as he drives back home.

Urmi is highly worried and tensed about gaurav’s behaviour, when ishaan walks in, and she says that she wanted to see him. he asks why isnt her phone going through, detailing that gaurav was trying her phone. she resigendly asks why was he calling her. He says that its gaurav and asha’s anniversary tomorrow, and he wanted to gift a saree, and hence wanted her opinion. She understands the huge misunderstanding. She clarifies it to ishaan, and explains the entire matter. Ishaan says that he doesnt believe this, and asks how could she mistrust gaurav.

She says that she believed what she saw, aftewr being fed with asha’s insecurities. she apologises to herself, and then he asks her to call asha too and clarify. he says that asha must have been severely angry at gaurav by now. She thinks about doing it and then stops, saying that they have to get rid of this issue altogether. ishaan is boggled. She says that they shall have to find a solid way to remove these doubts and insecurities, and they shall have to strengthen their relationship, by only love, eliminating all misunderstandings. She looks at ishaan and smiels.

Samrat is busy surfing through kiran’s online profile to be able to date her better, when he gets a distraught kiran’s call, asking him if he can come rightaway to meet her as she got into another fight with her husband and is feeling very lonely. he is tensed but complies neverthelss, feeling victorious that things are happening itself for him, saying that he shall meet and pick her up at Lokhandwala Circle. urmi hears this from a distance and is boggled. She doesnt pay attention and leaves for inside. Urmi is setting up the dinner table, when ishaan comes and caringly asks if he can help her, but she denies.

Samrat rushes down to ask tani for her car keys for an emergency. She asks whats the matter. He says that a friend from Jhansi, has met with an accident. Shashi curiously asks whats the name of the friend. samrat glares at her and she silences herself. Tani gives him the keys and then asks him which hospirtal. he gives a random name. urmi comes and points out that he was just talking to someone saying that he shall pick up at lokhandwala circle, and asks where exactly is he going. samrat is shocked and speechless.

Then he turns it against her only, instigating tani, that she is trying to create doubt in their relationship. shashi understands that he is again going to meet kiran. She too support urmi. tani gets influenced and starts hollering at urmi. Ishaan asks tani to behave, while samrat stands for tani. After a bitter verbal fight, samrat leaves, when tani says that she trusts him.

Meanwhile, while sandhya stands guard for tani’s arrival, damini uses the duplicate keys that they got made, and then opens the locker to samrat’s wardrobe, but to her disappointment doesnt find the papers. She is frustrated that samrat is more cunning than they thought. she wonders where could he have hidden them.

Samrat meets kiran, who is visibly distraught. she bares out her heart about her abusive husband to him, and he pretends to be a patient listener. He holds her hand and asks her not to cry and compose herself, and not waste these tears, as herhusband doesnt realise her true worth, and he has started taking her for granted, and soon he shall regret. She starts comparing his caring nature for his wife as compared to her husband’s callous nature.

Lies of the Heart 6 August 2020 Update – Samrat pretends to be affectionate and caring. He assures her that everything would be alright, while she says that if he leaves her, she would die. He finally pulls the car to a halt, and pretends to be angry, saying that she cant die, or talk like that. He asks her to take a lesson from his life, as he too bears through it, with s s mile on his face. She breaks down in his arms, and samrat lustily thinks that the ball has itself landed in his court and now he can take full advantage of it, tonight itself, as tomorrow might not present the wonderful oppurtunity again. Hee leeringly eyes her arm, as he caresses hr arm. 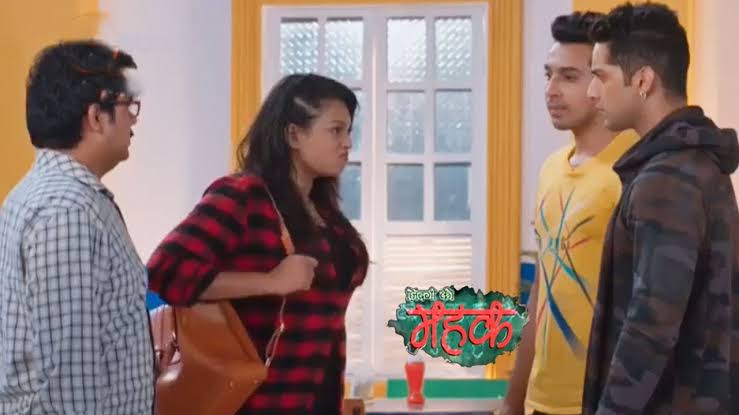