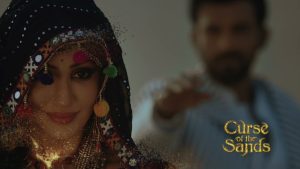 Click Here To Read Previous Update on Curse of the Sands

Curse of the Sands 21 June 2021 Update starts as Siya tries to prepare gajra from thread and thread breaks. She rechants puzzle and realizes she has to prepare gajra from her hair strands. She does same and solves puzzle. Ram’s body till waste turns back to nromal from stone. He rejoices and asks Siya to hug him. She does. A romantic song..plays in the background. Mohini thinks their romance will end soon once she gets what she wants.

She orders her Maya and Madira to pour hot water on Ram. They do same. Ram shouts in pain. Siya pleads Mohini to spare her husband and when she does not tries to slap her. Mohini holds her hand and says she did a mistake last and her husband is suffering now, if she does it again, she knows what will happen to her husband. Siya bends and pleads. Ram asks her not to do that. Maya and Madira continue pouring hot water on him on Mohini’s order. Siya falls on Mohini’s feet and pleads. Mohini orders Maya and Madira to stop and asks Siya to rest now as she has to solve 4th puzzle tomorrow. Ram and Siya get emotional again.

Mallika whole cooking food blabbers that Mohini is jealous of her beauty, so she is troubling her. She turns and gets tensed seeing Mohini behind her. Mohini asks if she is so beautiful, then she should be knowing dance and orders her to dance for her. Mallika does mujra disguised as a consort in front of Mohini and then once she is finished with her mujra pleads her to spare her son and return his youth. Mohini warns her to be in her limits.

Siya cries in front of Dadimaa. Dadimaa asks reason. Ram says that Siya thinks she failed to protect her family members. Dadimaa says they are all alive because of Siya, so she should not feel guilty. Mohini takes Siya to her secret room again and shows her 4th puzzle. Siya solves first part of puzzle as mangalsutra and then next part as honeyweb in which mangalsutra is hidden. Mohini says there is a honeyweb on Behramgarh’s each wall, how will they distinguish.

Siya reads 4th puzzle’s last part and solves it to honeycomb. Mohini says Behramgarh’s each wall has honeycomb. Siya says she knows this web as she has seen it while traveling with Ram. Mohini takes her to jungle where biggest honeycomb is and they see mangalsutra hidden in it. Siya asks how will she get it. Durga Dayi enters disguised as honeybee and stinging Mohini asks if she enjoyed. Mohini yells and asks Siya not to fall in yakshini Durga’s trap and burn honeycomb to get mangalsutra. Siya says she will not burn it as honeybees will also die or get homeless. Durga dayii asks if she will return without taking mangalsutra. Siya says never.

Mallika in palace keeps her feet in warm water and yells that Mohini made her dance and broke her back, her back is aching like hell.

Dadimaa brings herbal tonic for her and asks to have it. Mallika yells that because of Siya’s mistake, her son is suffering. Dadimaa says she is trying to save Ram and even will get back Vivian’s youth. In jungle, Siya drapes her dupatta over her body and walking towards honeycomb tries to get mangalsutra form it.

Honeybeeds bite her. Mohini says sautan has gone mad. Durga Dayi says Siya is intelligent. Siya gets mangalsutra from honeycomb. Mohini rejoices. Durga Dayii warns Siya not to fall in Mohini’s trap as she is trying to get rani Rajeshwari’s elements for her evil intentions. Mohini asks not to believe her and disappears with Siya.

Siya reaches palace and seeing Ram getting further well emotionally hugs him. Mohini feels jealous and then tells Mallika that she will go and finish Yakshini Durga Dayii before she spoils her game. Dadimmaa gets a dream of Ram hugging chudail Mohini and thanking her for saving him. In living room, Siya tries to feed soup to Ram. Ram resists. Siya says she will prepare rasgulla for him. He says she is his rasgulla and twists her chins. She shyingly shouts no.. Dadimaa rushes them worried and requests Siya not to help Mohini from hereon as she is planning something more evil. Mohini emerges and pulls Dadimaa’s hair pushes her away.

Dadimaa falls down. Siya rushes to Dadimaa and angrily slaps Mohini shouting how dare she is to push Dadimaa. Mohini warns him to dare not to touch her again. Siya continues slapping her and says she cannot harm Mohini, but if she harms herself, Mohini will feel pain more than her. She starts hitting herself and Mohini feels pain. Dadimaa and Ram pleads not to harm herself.

Siya confronts Mohini chudail that she crossed all her limits by harming Dadimaa. Mohini says she is chudail and Siya cannot harm her. Siya says she can harm herself to harm Mohini. Mohini reminisces Rajeshwari’s curse that if she tries to harm a Pativrata, she will bear more pain than her. Siya slaps herself and slits her palm.

Mohini feels pain and her palm slit. Ram pleads Siya not to do that. Siya then hits her head to a pillar warning Mohini to apologize Dadimaa. Mohini does not. Siya continues punishing herself. Mohini writhes in pain and apologizing Dadimaa pleads to stop Siya. Dadimaa stops Siya. Mallika enters and starts her overacting and drama. Mohini tells Siya if she is done with her intelligence,let us go and solve next puzzle. She disappears with Siya. Mallika continues her overacting.

Mohini takes Siya to her place and shows first part of next puzzle. Siya solves it as golden anklet and reminisces Rajeshwari and Mohini’s incident. Next part of puzzle emerges. Siya solves it as shahi murgi/royal chicken and asks where to find it. Mohini says she knows about it and describes its story. Siya asks her to take her to the place were these chickens are found. Mohini takes her there and says she told there is no one here. Durga Dayii emerges wearing as chicken dress and says she came back again. Mohini says she needs royal chicken.

Durga dayii says it is on the other side of hut. Mohini walks to chicken and seeing its golden egs boasts that she can easily pick it, walks towards it. Chicken spits fire on her. Mohini backs off shouting. Durga dayii says it is not so easy to get golden anklet. Mohini gets sword to kill chicken. Siya picks chicken and it spits fire on Mohini again. Mohini asks why did she save this chicken. Siya says a mother is always worried about her child, even chicken was doing same.

Chicken gives Durgeshwari’s anklet. Siya picks. Mohini asks to give it to her as she is waiting for it since 500 years and snatches it. Anklet burns in her hand and she falls down throw it. Anklet falls on her stomach and she writhes in pain. Siya asks Durga Dayii what she wanted to warn against Mohini. Durga Dayii says Mohini showed her side of fake story, she will show her real story and goes into flashback where dying Durgeshwari says Mohini will trouble her child in future to take revenge, so her body’s last right should not be performed to keep Mohini from taking her revenge.

Curse of the Sands 21 June 2021 Update ends as Siya tells Durga Dayii that she h as to give anklet to Mohini to save her husband. Durga Dayii says she will lose her husband then. Siya says no black magic or evil can separate her and her husband.