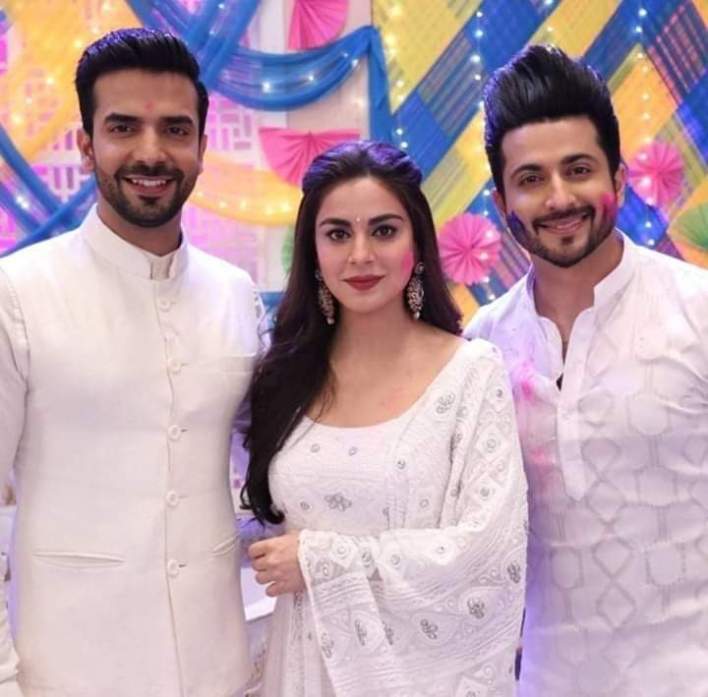 Kundali Bhagya 1st December 2020 Update starts with Rishab mentioning that Sarl is not just a relative of their house but like a mother to them so he cannot bear that they are in jail, Sherlin explains that this means she should give her the right to kill their son however Rishab says that when he gives someone the right to be like a mother means that she cannot even think of doing anything like this, he further mentions that even then if she desires to not have any relation with her he would not force her but she should take back the FIR which she has filed against her but Sherlin refuses and leaves the room.

Preeta is in the hall performing the pooja of the Karwachot, Karan seeing her exclaims that she is a remarkable person because she is still performing the pooja when her mother is facing such extreme situations and this proves how kind a person she is, when they end the pooja Ramona exclaims that the daughter in law of the family should seek the blessings of her mother in law, Preeta seeks the blessings from Rakhi who blesses her and prays that she lives the rest of her life with her husband, Mahira seeing this gets angry so turns to Dadi and Karina who both bless her.

Rakhi seeing them calls Karan to her explaining that there is a ritual in their family and since it is the first Karwachot of Preeta then he would have to gift her something but it should be of her choice and not his, she asks her to seek anything which she desires, Karan also asks what she wants, Preeta starts to think then exclaims that she wants her mother, Preeta mentions how she is the one who taught her everything which she knows and knows she cannot do anything of the sort because she always cares for everyone and if her mother is not with her then she desires that Sarla be with her and also that she is really happy.

Rakhi also explains that she knew Preeta would desire the same thing because she knew how Preeta is and that she has taught both of her sons that they should never stand with those who are false so he should fulfil his responsibility and make arrangements to get Sarla freed, Karan also exclaims that he will soon bring Sarla and get her freed.
Sherlin exclaims that she is doing wrong with her by ordering Karan to free Sarla,

Mahira even mentions that she is taking sides between both her daughter in laws, even Ramona exclaims that she is not at the right side of law but Rakhi exclaims that this is not right as she knows Sarla cannot do anything like this and he should go, Karan is about to leave when Karina stops him explaining that he should not do this as the police would take care of the case and if Sarla is innocent then would be freed, however Karan leaves after thrashing her hand. Preeta thanks Rakhi and hugs her who says that it is nothing of concern because she is the daughter of her family.

Karan and Rishab both knock at the door of the lawyer, he refuses to come explaining that his wife has kept the fast for him however both karan and Rishab explain that it is an emergency and they need him to come, they both forcefully take him without even letting him change his clothes, Karan says that he can change them in the car.

Sarla orders Shrishti to leave but she is adamant to stay until Sarla is released, she then orders Janki to take her. Shrishti warns her that if she touched her then It would create a lot of problem because she is not going to leave her mother alone, Janki responds that she will never do anything of the sort as she is also not going to leave her, Sarla gets irritated then tries calling the constable or the inspector however is not able to find anyone.

Preeta enters the police station demanding to meet her mother, the inspector mentions that already two visitors are meeting her and their names are Shrishti and Janki, she orders the constable to inform them that the visiting time is over, Preeta however pleads to let her meet her mother as her husband is trying and they are hopeful to attain the bail papers for Sarla but the inspector mentions that it is unlikely because all the lawyers would be with their wives and she also has to leave as her child is in the hospital, they are talking when Karan comes explaining that it would not take much time, Rishab shows her the bail papers.

Preeta starts weeping, Karan inquires why she is crying at which she responds that they are because of the happiness as she did not think that they will be able to get Sarla freed, Karan says that if she is happy then should smile and not start crying as it is not right, Preeta says that otherwise Sarla would have to spend the entire night in jail, Karan exclaims that he is The Karan Luthra and she should not worry.

The inspector agrees and orders the constable to release Sarla, Preeta thanks Rishab who mentions that she should thank the lawyer who exclaims that they have forcefully brought him, Rishab explains that it was an emergency and they are thankful for his help, he warns them that the problem has not been solved because Sarla has been charged with a heinous crime and she can be arrested at any given time, they all get really worried.

The constable come to the cell, Sarla asks her to take Shrishti and Janki away as they are not leaving, the constable exclaims that she is letting Sarla go as she has gotten a bail, all of them are in shock over who attained her bail.

Sarla comes out, Shrishti seeing Preeta hugs her and then exclaims that they knew she would get her bail, Sarla even hugs her, then thanks Rishab and apologizes explaining that she never desired to harm his unborn child, he says that it is not the case as he knows she is a mother so would never hurt them, Preeta then mentions that she did not do anything and Sarla got the bail because of Rishab and Karan.

Sarla takes the hand of Preeta and Karan, she mentions that they both must leave as it is the time of the pooja, she exclaims that the first Karwachot is something which would prove that their relation would remain strong, she even gives them her blessings and showers her love on them, Karan assures her that he would protect her daughter. The inspector asks her to sign the papers, she orders them to leave.

Ramona is trying to console Mahira who mentions that there is nothing wrong, Sherlin comes mentioning that Sarla has gotten a bail, Mahira gets worried inquiring how is it possible because she assured that Sarla would not be able to get a bail, Sherlin mentions that what can she do if her plan has failed.

Kundali Bhagya 1st December 2020 Update ends as Ramona comes consoling them that if Preeta has won a fight then they should prepare for the next step and try to take the revenge from her.