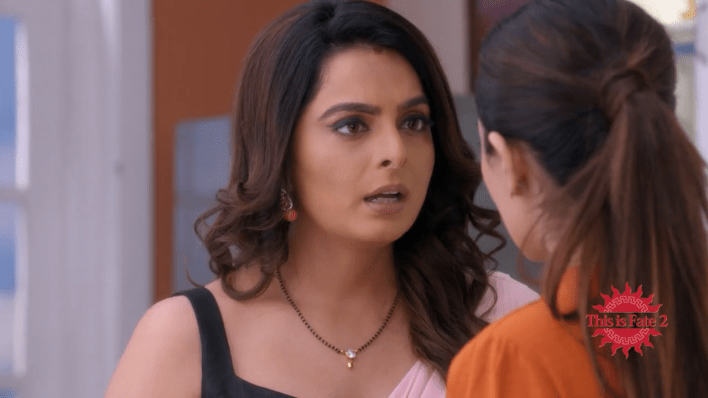 Kundali Bhagya 30th November 2020 Update starts with Sherlin exclaiming that in the court cases are won with evidence and they don’t have any proof against them, Mahira mentions that even if she would go to find any proof against them then would not be able to find them as they have hid the proof, she mentions how they switched off the cameras when they were mixing the poison in the ladoo.

Sherlin says that the only reason they are saying this in front of her is because they want her to feel the pain, Preeta gets really angry and slaps her on the face which irritates everyone.

The police constable comes to Sarla saying that someone has come to meet her, she sees that it is Shrishti who consoles her saying that she would help her come out of the jail, Sarla starts laughing saying that it is the first time Shrishti is coming to help her mother. Janki also comes there. Sarla inquiries why she told Preeta about it. Janki mentions that she was shouting at Sherlin but Preeta came there and listened. Sarla says she doesnot want Preeta to come to her aid as entire Luthra family already want to throw her out of the house. She doesnot want Preeta to worry for them, Janki also thinks that she was wrong to go and trouble Preeta as Preeta looked really weak.

Preeta gets really mad and is about to even slap Sherlin mentioning that she was always bad but now being with Mahira has gotten even worse, she thinks how Mahira’s mother say such a thing to Sherlin as she doesnot act like a mother, Mahira mentions that she is her mother and has ruined the entire life of Preeta while being in the hotel. Mahira mentions that she would get really tired so should break the fast.

Preeta exclaims that this is what they desired and the reason they were doing everything however she has kept the fast because of her rituals and feels she will get even stronger when she fulfils them so they should not think she would ever break the fast.

Karina is on the phone with Kritika, when she ends the call she tells Dadi that Kritika went to her in laws house and would perform the pooja there. Dadi mentions that it is suitable because there has been a lot of trouble in their family, Ramona also comes to the house she inquires if Rakhi is feeling okay and did they perform the pooja, Rakhi mentions that they were not able to do it as Preeta and Sherlin got ill. They explains the entire situation, Ramona asks if they have filed any complaint against Sarla.

Karina mentions that Sherlin did file a complaint and Sarla is locked in jail now. Rakhi refuses to accept the blame but has to greet the other guests, Ramona exclaims that the only reason Sarla did this was because Preeta should give birth to the first born of their family.

Shrishti pleads with Sarla to let her go and confirm what has happened however Sarla pleads with her to not go as then Preeta would not be able to live peacefully in the house, Shrishti mentions that she is not a child and they have filed an attempt to murder case against her which is really a difficult situation for them, Sarla exclaims that she never thought Sherlin would stoop so low as she risked the life of her own child, they all are really confused.

Shrishti exclaims that Sherlin is not even worthy to be able to call a mother and Mahira also does not have any honesty in her.

Mahira inquires what ego does she ahs and she has already ruined her fast, Preeta exclaims that this is not her first Karwachot as she had kept the fast the previous year as well and karan himself broke her fast so this is why she kept the fast this year as well and believes mother Karwa has blessed her. They are talking when Ganesh comes explaining that they are calling them for the pooja, when he leaves Mahira mentions that they would leave for the pooja while she should just remain crying.

Mahira is joyed after seeing her mother so immediately goes to meet her, they are talking and she inquiries if Mahira is oaky at which she explains that she is feeling dizzy and not well but would still keep the fast, Rishab tries talking with Sherlin however she dodges him and stands beside Ramona.

The guests inquire if they can start the pooja at which Rakhi agrees, then one of them points at Preeta who has come to the pooja, she exclaims that Preeta is really good looking because she saw her at the ceremony.

Rakhi goes to her mentioning that she is really joyed that Preeta fulfilled her responsibilities with all her might even when she is hurting herself but has not made any problem with her responsibility towards the family, Rakhi exclaims that she is the wife of Karan so should perform the pooja.

Kundali Bhagya 30th November 2020 Update: Rishab takes the hand of Sherlin and pulls her into the room, he mentions that he has to talk with her, she fears that he might fight with her, however he apologizes saying that he cannot easily express his feelings because he does not know how to express his feelings easily as he does not play or have fun but knows how to fulfil his responsibilities and cares for everyone including her, when she is about to leave he stops her saying that there is some other thing, then mentions that Preeta is a very important member of their family as she is the wife of karan and he loves his brother a lot and Sarla is like a mother to them so he cannot bear if someone who is like a mother should remain in jail.