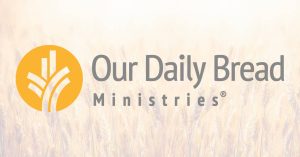 INSIGHT: The kingdom of Israel was divided after Rehoboam came to the throne and refused to lift the tax burden his father, Solomon, had imposed. Jeroboam, who led the revolt, set up his own kingdom, the Northern Kingdom of Israel, whose capital was Samaria. The Southern Kingdom, Judah, continued to be ruled by the house of David with its capital in Jerusalem. In today’s passage, we read about Jehoshaphat, the fourth king of Judah. In 2 Chronicles 17:3–4, we learn that “the Lord was with Jehoshaphat because he . . . sought the God of his father and followed his commands.”

For five years in the late 1800s, grasshoppers descended on Minnesota, destroying the crops. Farmers tried trapping the grasshoppers in tar and burning their fields to kill the eggs. Feeling desperate, and on the brink of starvation, many people sought a statewide day of prayer, yearning to seek God’s help together. The governor relented, setting aside April 26 to pray.

In the days after the collective prayer, the weather warmed and the eggs started to come to life. But then four days later a drop in temperature surprised and delighted many, for the freezing temperatures killed the larvae. Minnesotans once again would harvest their crops of corn, wheat, and oats.

Prayer was also behind the saving of God’s people during the reign of King Jehoshaphat. When the king learned that a vast army was coming against him, he called God’s people to pray and fast. The people reminded God how He’d saved them in times past. And Jehoshaphat said that if calamity came upon them, “whether the sword of judgment, or plague or famine,” they would cry out to God knowing that He would hear and save them (2 Chronicles 20:9).

God rescued His people from the invading armies, and He hears us when we cry out to Him in distress. Whatever your concern—whether a relationship issue or something threatening from the natural world—lift it to God in prayer. Nothing is too hard for Him.

How has God answered your prayers? What situations in your life or in the world could you commit to Him today?

Creator God, You made the world and all that’s in it. Please restore order and save Your people, whom You love.

Our Daily Bread 22nd July 2021 Devotional Message. Our Daily Bread Ministries  (ODB) is a Christian organization founded by Dr. Martin De Haan in 1938. It is based in Grand Rapids, Michigan, with over 600 employees. It produces several devotional publications, including Our Daily Bread.