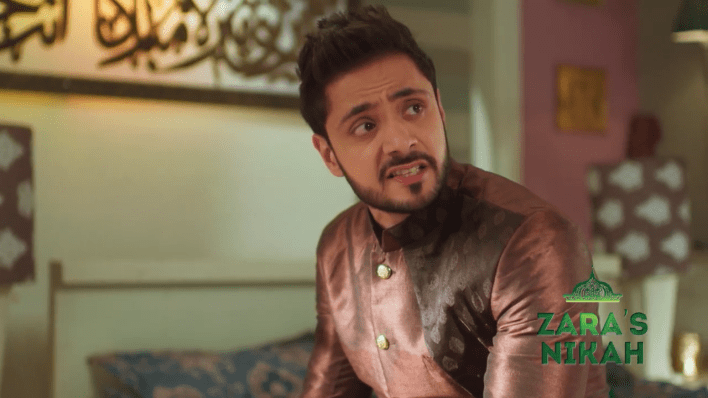 Zara’s Nikah 7 December 2020 Update starts as Zara falls from stairs, Kabir runs to her and gets hit by stairs too. Zara gets up and says there is oil on stairs. All rush to her. Salma asks how did you get this wound? Kabir recalls Zeenat’s words that if they remain together then Zara will keep getting hurt, he asks how this happened?

Zara says I wanted to call you here and slipped on oil. Salma asks servant how oil spilled here? She says I dont know. Nussu says I saw her throwing oil on stairs. Salma says Ayesha’s servant Sehrun sent her. Kabir calls Sehrun and asks her if she knows any Mehrun? She says no, servant I sent was threatened and sent away. Kabir ends call and asks who sent you? Mehrun says I dont know Sehrun but I found out there was a job here so I came here.

Kabir says then why did you throw oil there? Mehrun says I was taking oil for kitchen, it spilled on stairs, I went to bring cleaner but Zara slipped before I could reach her. Kabir says I dont trust her. Ayesha calls Kabir and says you called Sehrun? Kabir says Mehrun threw oil on stairs and Zara slipped, I feel she has been sent from someone. Shahbaz says no no, I know that girl, she is a good girl, dont send her to police.

Kabir says if you are saying its okay. He ends call and asks Zara to go and rest. He gets dizzy. Kabir says I am fine, I just have to sleep. Mina says did you get hit anywhere? Kabir recalls how he had hit his head on stairs. Mina says he needs rest. Azra takes him to room. Mina says to Zara that there must be some problem, I am giving him headache’s medicine for now.

Alina is massaging Kabir’s head. Zara comes there and puts hand on his head. Alina says now its fine? Zara says you will take rest. She pushes him on bed and gives him medicine. Kabir goes to sleep. Zara tries to leave but Kabir holds her hand in sleep. Zara whispers to Azra and Alina if they can sleep with Mina aunt? They nod and leave. Zara holds Kabir’s hand and kisses it.

Ayesha says to Shahbaz that I know you are worried for Kabir, dont worry. Shahbaz says I got Kabir married to Zara so she could help him become head priest of city but what he got from this relation? just arguments, hatred and pain. Ayesha says they will remain happy together only. Shahbaz says Kabir was moving on in life and she cameback. Ayesha says dont you see that Kabir loves her so much, maybe he will become interested in becoming head priest again, dont be sad.

Zara calls Shahbaz from Kabir’s phone. Zara says Kabir is sleeping, he is worried about my safety, I think Maqbool and his boss should be caught, did you find anything? Shahbaz says Rizwan was behind all that, I dont think there is any boss behind it. Zara says I need your help, can I get Maqbool’s address? Shahbaz says police is investigating, dont worry, he ends call.

Zara comes to Azra and wakes her up. Shahbaz comes to store room and opens box. He takes out gun and puts bullets in it.

Zara makes Azra wear burqa and says I found Maqbool’s address from police record, his mother lives there, we have to go there.

Shahbaz calls his goon and says rat is coming out its mole. Maqbool’s mother lives in his house, I want you go there, I am coming there, I want to finish Maqbool’s story. He takes gun and leaves from there.

Zara and Azra comes to Maqbool’s house. She says we have to go inside silently. Zara goes on backside of house. Zara brings ladder and looks inside from window. Shahbaz is on call and his goon has Maqbool and his mother on gunpoint. Shahbaz says I wont spare you. Zara sees goons putting gun on Maqbool’s mother but doesnt see Shahbaz’s face.

Kabir wakes up and whispers for Zara. Zara comes there and holds his hand, she says you have to sleep. Kabir says where did you go? Zara says I will always be with you. Kabir says I want to be with you but I have some helplessness. Zara says we can never separate, I promise. She hugs him.. it all turns out to be Kabir’s dream and he is sleeping.

Zara says to Azra that we cant call police as they will call Kabir and he will become worried. She says we have to look inside. She runs to other door of house and counts that it took 30 seconds to reach there. Zara tells her some plan, Zara says nothing wrong will happen. Azra leaves. Zara climbs ladder and looks inside, she calls Azra and asks her to knock on door. Shahbaz hears noise on door on call. He says someone is here? Zara asks her to knock more. Goons go to check.

Azra runs and climbs on ladder. Zara says I am coming. Azra jumps inside house. Zara tries to climb ladder but she falls down. Goon sees her and points gun at her. Zara screams at Azra to run. Azra tries to free Maqbool’s mother but goon comes and grab her. They bring Zara inside room.

Kabir wakes up and has headache. He looks around. He tries to open door but its locked, he has headache and faints.

Ayesha wakes up and is worried about Kabir. She goes to look around for Shahbaz and says what to do? She calls him but his phone is off. She calls Kabir but its off too.

Goon ties Zara and Azra. They think to call Shahbaz. Shahbaz is at another site with Maqbool kidnapped there. Goons call him and shows Maqbool’s mother her son, she pleads to leave her son. Shahbaz says do as I say and tell police what I am telling. Maqbool says I am ready to do all that. Zara frees herself and takes phone, she says who is your boss? Goon grab Zara and says we should kill them both. Azra pleads to let them go. Goon brings poisonous gas, he fills room with it and leaves. Zara, Azra and Maqbool’s mom start coughing and fainting.

Zara’s Nikah 7 December 2020 Update ends as Ayesha calls Salma and says Kabir and Zara are fine? Salma says they are in room sleeping. Ayesha says can you please check on him for once? Salma nods. Salma comes to Kabir’s room and sees him lying on floor. She screams for Irfan. Irfan rushes to room. Ayesha hears all that on call and is shocked.