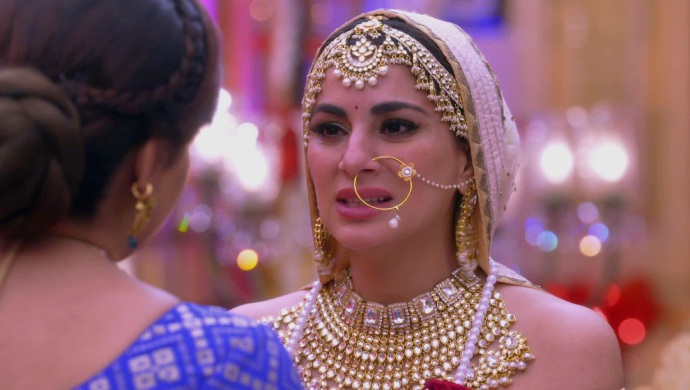 Kundali Bhagya 16th December 2020 Update starts with Karan asking Rakhi why sis she going to Manali, Rakhi orders him to first see the names and after seeing them he is shocked because it is himself and Preeta, Karan says that there is no need but Rakhi mentions that they both are going to Manali for a vacation as it is their honey moon gift, everyone is shocked but Rakhi explains that they both as husband and wife have the right to spend quality time together with each other as they are always busy with the problems which the entire family is facing.

So she decided that they both should spend some time together alone and should consider it as a gift from her, Preeta says that there is no need because they already know and understand each other very well.

Rakhi exclaims that he is actually very happy but is not showing it and if he is really that arrogant even then he must go to Manali and spend time with Preeta even if it is fighting but they should also see the beautiful mountains as otherwise people would say that she was not so generous as even when her son got married she did not let them go to honeymoon, Rakhi orders Ganesh to bring the suitcases as he would need to help Karan, Preeta tries to leave however Karan stops her forcing that she thank him for saving her from Rakhi’s scolding, she leaves and Karina also gets mad, Dadi asks Sameer to follow her as it is not his honey moon.

Mahira goes to Rakhi questioning why she can allow them both to go to the honeymoon, Rakhi exclaims that she is the only one who can do this and would have done it before but because of the problems she could not do this and even she was ill but now she has gotten better so should accept the fact that Karan and Preeta are now married.

Shrishti is searching for her files but Sarla is tensed and when she finds them questions why is she so tensed, Sarla refuses to say anything then Shristhi asks her to talk with Preeta and pack her warm clothes, Sarla starts questioning Shrishti however they then video call Preeta, Sarla asks if she is okay as Shrishti said that she should pack the warm clothes.

Shrishti mentions that she was only looking after her expenses as otherwise they would have to buy a lot of clothes, Shrishti then explains she should go and spend a lot of money on the new clothes, Sarla explains that someone from her house called and it was Sameer so what has happened, Preeta in a low voice mentions that she is going on a honeymoon at which Sarla inquires about the location, she is shocked to hear about Manali then mentions that she would pack all her clothes but wonders if anyone would like them in her house including Karan as they wear branded clothes.

Karan comes removing the misconception saying that she looks prettier in the clothes which Sarla has made, she ends the call after saying that she would send the clothes tomorrow, Sarla starts crying after ending the call, Shrishti asks why is she weeping because it is a moment of joy, Sarla questions why did she not tell her before however Shrishti leaves after taking her mobile phone.

Karan asks Preeta why she was so nervous after mentioning that they were going on a honeymoon, Preeta exclaims that the only reason she was so nervous was because people tend to think something else, karan doesnot understand but Preeta mentions that she cannot explain however Karan explains that he would tell her and it is that they both would be alone in a room with no disturbance, he tries to come closer but Preeta leaves the hall.

Mahira in the room exclaims that she was happy after knowing that Preeta and Karan donot share the same bed and that Preeta also threw him out of the room but instead when Preeta was to be scolded she got a reward and now they would be alone however Sherlin says that she cannot comprehend what would happen if the honeymoon becomes successful, Karina comes mentioning that nothing would happen as Mahira would be the one to celebrate the honeymoon with Karan.

Karina exclaims that she has always supported Sherlin but now needs her support because she would take Mahira to Manali and should get her close to Karan as Preeta would be alone so they can handle her, Mahira mentions that she now feels that everything would happen as she desires, she hugs Karina exclaiming that she cannot believe how clever she is.

Shrishti and Janki reach the Luthra house, Janki inquires why did she bring her here because she has a lot of work however Shrishti says that she can do it later, they wonder where is everyone at which Janki says that she is mad because not everyone would have gone for the honeymoon.
Preeta comes down and immediately hugs Janki, she mentions that they have gotten late because everything has been packed and there is no more space, Janki exclaims that there is nothing to worry as she has only three bags, Preeta however exclaims that it is not the case as she is going with The Karan Luthra and he has the habit of taking all his belongings, they all start to joke as Preeta only has a single small suitcase.

Karan pleads with them to stop as otherwise they would get late, when they are about to leave Janki gives them the bag and Shrishti makes a joke which irritates everyone, they all take the blessings of everyone, Rakhi inquires if he has kept the address however Karan goes back to get his mobile, they all head to the cars when karan comes after changing his clothes, he exclaims that there was still another bag so he wore the clothes and left it there.

They are not able to close the car trunk however Karan refuses to take out any bag but Shrishti says that she would do it because they are going for the honeymoon so should not fight, Shrishti exclaims that her sister is a really difficult person to keep up with, Janki says that she should give them a good news after coming back and it should not be a matter of concern, Preeta and Karan are not able to understand but then leave, Janki advises Shrishti that they should also leave for the house but Shrishti sends her back, while she remains with Sameer.

Kundali Bhagya 16th December 2020 Update ends as Preeta and Karan are in the car, she is remembering what Janki said explains that she would not sleep on the bed but instead use the sofa in the resort because she has doesnot feel comfortable on the bed, Karan is not able to understand what he should say.