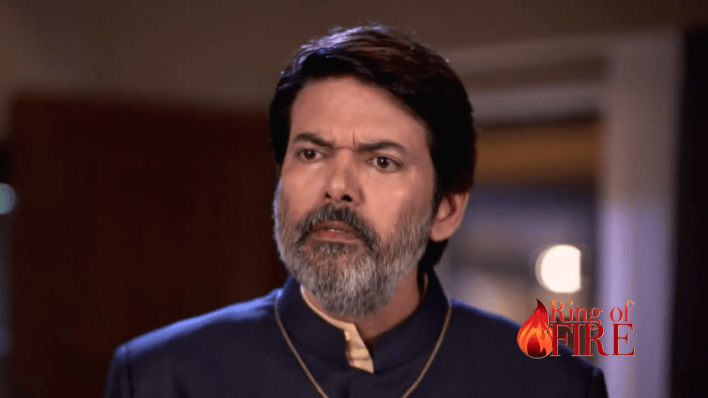 Ring of Fire 16 December 2020 Update starts in the early morning, Ragini plays bhajan loudly and prays god. Whole family wakes up rubbing their eyes. Daadi gets happy seeing elder bahu doing pooja. Shristi wakes up and checks Vishu’s temperature and says fever is down now. She gets ready and goes down for pooja. Ragini thinks whole famil came except her mister.

Dulari peeps into Vishu’s room and gets happy thinking he slept on bed with Shristi and their differences cleared. She thanks icchapurti maiya. She then peeps into Anurag’s room and gets more happy seeing even him sleeping on bed, thanks ichapurti maiya. Ragini serves aarti. Daadi suggests her to keep bhajan volume low. Anurag also joins. Dulari comments ichapurti maiya fulfilled prayers and both bahus are following their duties. Anurag stops her and yells to act mature.

Shristi goes back to room and sees Vishu shivering holding her dupatta. She checks and says he is having fever. Whole family gathers. Daadi suggest to prepare tulsi tea, fever will lessen in 2 hours. Shiristi suggests to call doc. Ragini says she already informed Narad to bring doctor. Vidhvan enters and says he would have called doctor. He tells Shristi that Purshotam had called after knowing about attack on her. Shristi asks not to tell anything about her to her family.

Parag sees Narad going hurriedly and asks reason. Narad says Ragini asked to call doc. Mom asks Parag to accompany Narad as she is worried about Ragini. Vikral comes and says Ragini is fine and asks Narad to take doc as Ragini said. He tells Parag that tender results, which Ragini had filed 1 year ago, will be out in 2-3 days and asks to come along.

Anurag gets a call from his friend who informs that he won a contract and to check mail. He gets very happy. Ragini enters and while drinking water chokes. Anurag scolds her. Narad brings doc next. He checks Vishu and gives prescription slip to Shristi. Anurag enters and asks if Vishu is fine. Doc says yes and says he gave prescription slip to his wife/Shristi. Ragini says she is his wife and Shristi is Vishu’s wife. Doc apologizes and leaves. Ragini taunts Vishu to get well soon and grow up, else people will think his wife as some other’s wife. Shristi feels bad. Ragini says she is joking.

Surekha calls Shristi, but Shristi disconnects call. She asks Purshotam to go and meet Shristi once.

Anurag tells Vidhvan that he got a contract, but company wants him to pay 1 crore as deposit. Vidhvan gets tensed. Anurag says he will manage somehow. Ragini hears that and thinks ohw much money her mister needs. Purshotam comes. Vidhvan and Anurag greet him. Ragini fumes that Anurag gets angry seeing her fame, but is befriending with Shristi’s father. Vidvhan calls Shristi down. Purshotam says Shristi that her mother is worried about her and wants to speak to her. Shristi asks Vidhvan to do her a favor, even if she dies not to inform her family. Purshotam feels sad hearing that.

Shirsti requests Vidhvan not to inform her family even if she dies. Everyone stand in a shock. Shristi tells Vidhvan that he is like her father and she gives him right to perform her last rights if she dies. Purshotam tries to speak. She warns him not to come in front of her again and leaves. Ragini thinks good she did not study law, else she would have been like her. Vidhvan consoles Purshotam that he Shristi is angry on her, so she spoke wrongly. Purshotam says he can understand, asks him to take care of Shristi and leaves.

Dulari enters Ragini’s room wearing face pack and Ragini gets afraid seeing her. Dulari says it is her. Ragini says her mister needs money for his project and his father does not have money, so she is thinking how to arrange money for him. Dulari suggests to get shagun money bags which her father gave to Revati. Ragini praises her that she has solution for every problem and says she will go to sasuma right now. Dulari says she has gone to satsang.

Anurag enters his room speaking to someone over phone and checking file. Ragini asks if he needs tea. He thinks if he says no, she will pester him, says he really needs tea. Revati comes and calls Dulari. Ragini runs out happily saying sasumaiya came. She goes to living room and sees Vidhvan taunting Revati. She asks Revati to come along as she needs to talk something important. Dulari tries to speak, but Ragini forcefully takes Revati to a room and says her mister’s project is approved and he needs money, so she needs shagun money bags which her papa gave. Revati gets nervous and says howmuch money Anurag needs. Ragini says she wil find out, even then she will give all the bags.

Anurag puffs cigarette standing in balcony, thinking how to arrange money. Ragini brings milk. He nervously throws cig and asks she went to bring tea. She says sasuma sent milk. He says his friend is coming tomorrow and they are going to Harinagar, but she cannot come. She says okay and asks if he puffs cig. He says yes and asks not to inform family. She says she will not and even if cig butt is found, she will tell she puffed it. He thinks she can do anything.

Revati informs Brij that Ragini needs money bags to fund Anurag’s project. Brij says they should take Virkal’s help as he is rich and capable of funding them.

Next morning, Ragini sees Anurag sound asleep, sees his laptop and thinks she will find out how much money her mister needs. She takes laptop to kitchen and greets goodmorning to Shirsti, thinks she has to take help from her unnecessarily, asks Shristi to check and tell how much money her mister needs for his project. Shristi says it is wrong to check someone’s laptop without their permission. Ragini angrily says no need for her gyaan. Shristi says if it helps Anurag, she will. She checks laptop and says 1 crore. Ragini thinks that is why her mister is so tensed, she has to arrange money somehow.

Anurag wakes up in the morning hurriedly thinking how to arrange 1 crore for his project. He does not see Ragini around and thinks good she is not here, else she would have pestered him. He wraps his bed and rushes to washroom. Ragini returns with tea and sees him searching his laptop. She asks him to have tea and relax while she searches his laptop. She asks to check his bed sheet. He says she is mad and goes to check. She silently keeps laptop under pillow and says acts as searching. They both pick pillow at once. He drops it angrily. She says his latpot is found. He picks it and leaves yelling it is laptop.

Chutki bahu goes to Vishu’s room and asks him to get ready while she brings breakfast for him. he says he is studying books. She says she will get milk and roti for him. Shristi brings roti and milk. Vishu says Shristi ji takes care of him well. Shristi asks Chutki bahu to give Anurag’s medicine on time. Chutki hopes Shirsti sees Vishu’s innocence and good side and stays with him forever.

Ragini goes and informs Revati that her mister needs 1 crore. Revati nervously says how will they arrange 1 crore and suggests her to take help from her father. Ragini agrees and leaves. Revati relaxes that her plan worked.

Vidhvan gets tools for Vishu and says he got everything he needs. Vishu gets happy and asks how does he know. Vidhvan says Shristi told him. Shristi asks him to sit while she brings his evening tea.

Ragini calls Vikral and says like they file for tenders, her mister file for a project and needs 1 crore as deposit. Vikral smiles and says he will send 1 crore to Damadji and she can tell it is white money. He asks his wife to take 1 crore cheque to Ragini’s house. Ragini thinks her papa should not come here, else Vidhvan and Anurag will get angry.

Anurag returns home and tells Vidhvan that his friend did not come and he could not arrange 1 crore. Shristi congratulates him for his project. He says without money, her congratulation is waste. She suggests him to highlight his special skills in his presentation, he will get an investor easily. Ragini hears and fumes that she is dominating her husband again. She goes to Revati and asks to give her money bags.

Ring of Fire 16 December 2020 Update ends as Revati takes her to Brij who gives money bags. She walks to Anurag and shows him money and says it is her hard earned money, he can use it for his project. Anurag angrily throws money and shouts she earned it by shedding innocent people’s blood and he does not need it. 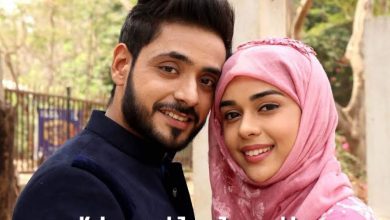 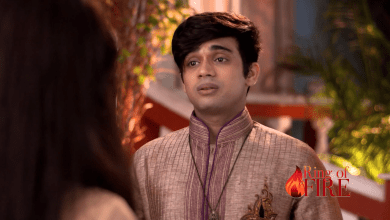