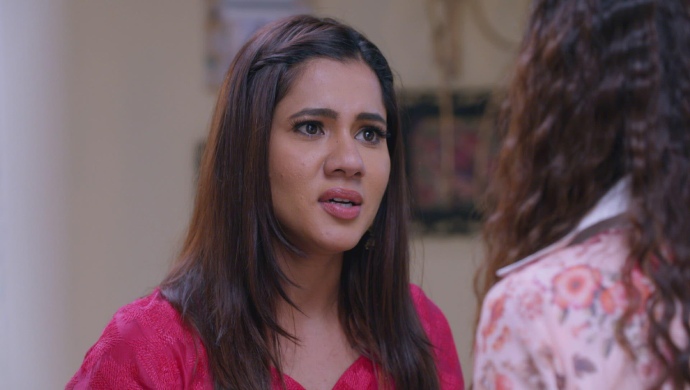 This is Fate 29th November 2020 Update on Zee World

This is Fate 29th November 2020 Update starts as Karan is in his room checking through the belongings but is wondering where si his cufflinks, he then starts to search the wardrobe of Preeta however she comes from behind asking him to stop looking, he explains that he is not able to find his cufflinks and it might be because someone might be a thief or have some agenda, he again asks her to close her mouth.

Preeta says that he must hurry as she knows where they are in her cupboard. She orders that he work quickly as she has to select her sarree because a lot of her time has wasted.

She starts searching the wardrobe, Karan also goes near her and starts daydreaming when he is near her, she gives him the cupboard explaining that he must leave as she also has to select her dress, Karan stands in front of the dressing thinking that he would not let her wear something that would ruin their function, he finally thinks that she has selected a dress in which they both would not look good however he finally thinks that she has selected a nice dress, however Preeta on the contrary is thinking that she would wear a dress in which she would not look nice that would ruin Karan’s day.

Karan sits on the cufflinks and hurts himself, she asks him why he is acting so carelessly as he is not in the playground so must remain calm as it is not worthwhile, Karan exclaims that he was only helping himself because the sooner he gets dressed the sooner he can leave as he feels that like a ghost in the room, they both get into an argument, Preeta exclaims that he doesnot even know how to say thank you, she trips while on her way to change but Karan catches her in the process, he leaves after thanking her, Preeta is left nervous.

Maira is calling Prithvi however he is drunk in his room wondering who is calling him, he thinks that there was a time when he was the one to cheat others however no the times have changed as he has been cheated, he mentions that drinking helps release the pain as the Luthra’s have taken his love, he prays that god has listened to his every pray so must give him Preeta as she is his love.

Prithvi answers that he knows why she called him and it is because she wants to make fun of him, he answers that she also lost her love fun when Karan married Preeta in the Mandap where she was to be with him, he is about to end the call but she explains that’s he ahs not lost anything until she believes it but seeing him thinks that he has believed that he has lost.

Prithvi mentions that he is not accustomed to hearing any foolish thing because he knows that she wants to lean on a shoulder to cry however he will not let her use his shoulder so how can she help him, Maira explains that she can make him get his love.Karan is walking when he bumps into Rishab who catches him, Rishab starts making fun of him asking if he has fought with Preeta because he can see the expressions, Karan answers that it is not the case because she has tortured him a lot by taking all his belongings and claiming that they are hers.

Rishab says that everyone has to share so it is not a big deal, Karan takes him into his room, after opening his wardrobe says that he has not shared it with Sherlin but doesnot see that she ahs her clothes in half of the wardrobe, Karan gets surprised mentioning that he did not even share a single side with him but has given her half of it, Rishab answers that eh would also feel nice when he gets accustomed to sharing his wardrobe.

Rishab answers that when he starts sharing his wardrobe it would be a lot sorted as Preeta would take care of it, Karan disagrees however Sherlin comes from behind mentioning that he never wanted to share the wardrobe but Rishab forced her and she only does what he desires, she then leaves Karan says that Rishab always acts as if there is nothing but now he knows that his relation with Sherlin is not nothing for which they should worry.

Prithvi’s mother reaches the house but is shocked to find that prithvi is lying on the floor so she tries to wake him up, then seeing the photo of Prithvi with Preeta she realizes that his heart is broken and so she is worried that his brother might come really soon.Preeta is in the kitchen looking after the preparations and she is really worried about what would happen as she is really worried about the preparations, the worker there asks her to drink some water and leave as she needs to get dressed.

Maira is standing in the hall thinking of how she convinced the worker to make Preeta drink the water by confusing her that she cares for Preeta as she would make sure that the function ruins and she has also ruined her wedding. Maira thinks that she has to ruin the face seeing ceremony as then Preeta would not be able to show her face anywhere, Preeta feels that she is having a headache as she was not able to sleep in the night.

The cook asks Preeta if she is okay, Preeta insists however she mentions that she might be tired and so must take some rest and she must also not worry about work however Preeta doesnot leave the kitchen.Sherlin is in the hall, Rishab stops her asking why she said all those things in front of Karan but she does not remember he then taunts her that he will make her eat some dry fruits so that she is able to remember then he explains that she said that a husband and wife should remain together, she gets closer to her and also gets physical with her, she turns after which she thinks that it is the best way to stop his questions as he asks a lot of them however he walks away.

Prithvi’s mother goes to open the door after hearing the bell, it is her son who comes in explaining that he got very excited when {Prithvi told him that he would be coming to the airport, however got disheartened when he was not able to come and if glass that there has been a loss in the business because now he will stay with them and not go back. His mother gives him water explaining that his brother desired to marry a girl however was not able to so is really disheartened.

Pawan goes to meet Prithvi but he doesnot wake up and is sleeping, Maira is constantly calling him but Pawan picks it up, she inquires why he did not come to their house because he accepted her proposal where she said that she would make sure Preeta becomes his wife, Pawan asks her to send her photo with the address as he would do, Maira asks the reason to which he answers that he is Pawan and whenever comes there is thunder that comes with him.

Preeta asks Ganesh why he is happy to which he says that the house is really lively and it feels really nice even when Preeta apologizes as because of her he got scolded by Karan, she says that there is nothing of the sort and he is used to his scolding and they both share a laugh.Karina hopes that Preeta doesnot create a scene as it would ruin their function.

Preeta is walking when Karan passes by, she stops him ordering that he should take back the ball from the room of Mahesh as she was about to slip, karan answers that she would place smaller balls in the entire room before he leaves, Preeta starts smiling, Maira comes out from hiding thinking that she would not let anything happen as she has made a plan to ruin the function of Preeta as she would be Karan’s wife in front of the whole society.Rakhi and Dadi both are ordering Ganesh to take care of each and everything as they never want anything wrong to happen in the function.

Karina is trying to stop Ramona however she is adamant to leave the house, Ramona mentions that she will not stay as her daughter was to be the wife of Karan so now she has no reason to stay in their house, however they all force her to stay but she insists on leaving. Rakhi and Karina exclaim that they are friends so she must stay because of it, Dadi also asks her to stay because of which Ramona agrees after which Dadi prays that nothing wrong happens in the function as it would completely ruin her reputation.

Preeta is getting ready in her room where Maira comes also dressed as her, she places the Kumkum in her mang, Preeta asks what is she doing she answers that she ahs dressed the same as Preeta and it is because she did what could not be understood and that is to marry a man who hates him so she doesnot accept it because she wanted to take revenge from her.

Preeta stops Maira mentioning that she should not think that Preeta married karan for the sake iof revenge however Preeta denies it saying that she informed her that she must not marry Karan as he is already her husband.

This is Fate 29th November 2020 Update ends as Maira stops her saying that she married karan and only the family was present however in the reception a lot of guests would be present along with the media who would take pictures that would be printed in the news and she would be with Karan standing beside him. as she won the previous night and she would win today.