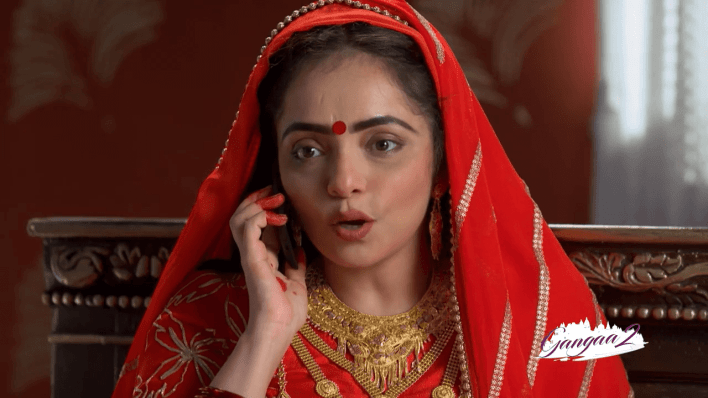 Gangaa 3 December 2020 Update starts after the haldi ceremony is done, they are asked to wash it down, with a pious bath. ammaji instructs the bride’s mother to wash the groom’s face and vice versa. seeing that there is noone from the bride’s side, ammaji asks vasudha to do the honours as her mother. She is more than happy to comply. they happily comply. ganga and sagar with the rest of the family, progress towards the water area.

Madhvi asks for sagar’s help. to arrange for water, she asks sagar to get the mug of water. oblivious to the live circuit, he progresses towards the water area. Sagar is about to put his hand inside the water pool. Rudra is tensed and is about to sense something. Ragini points out dancing lights to rudra, which are actually electricity sparks.

Meanwhile, before sagar can pick it up, the lights go off, and prabha is disappointed that the lights went off at a crucial time. Prabha is disgusted. rudra comes up just then, and tells that they dont need to investigate as he switcehd off the main fuse, and then shows them the live wire, that could have electrocuted sagar. all are shocked and aghast. Madhvi is concerned for sagar. she reprimands maharaj for the same. Prabha is very scared that her truth might be out, but is thankfully relived when it isnt. sagar’s father thank rudra for having saved sagar and then asks them to get back to the rituals. madhvi too is highly thankful. ammaji blesses him too. ganga and sagar eye each other tensedly.

Later in the night, prabha again points to the rest of the relatives, that the danger has been averted, but she keeps thinking, that this might be due to ganga, wo is a nice girl, but with ominously bad luck, as she lost her husband, and now these omens. the ladies say that they too thought about it, but didnt say anything to ammaji, as her sanity has gone out the window. ganga hears this from a distance and is tensed and distressed.

Prabha finds her there, and pretends not to see and says that due to the lord and rudra’s help, sagar was saved, and god knows if destiny should be toyed with like this. they gossip that it isnt needed that a widow be remarried. ganga however is set to thinking for sagar’s safety. prabha leaves seeing that her mission is accomplished. she pretends to see ganga, and asks when she came. she says that she just did. prabha asks ganga to get some milk for the guests. she resignedly leaves. PRabha thinks that she shall keep trying and wont accept defeat till her work is done.

Later, in her room, ganga is tensed remembering prabha and the others’ words. sagar comes and stands by her side, while she is in tears. he asks her whats the matter, finding her tensed, and asks her whats it. she says that she cant see him in pain and trouble. he asks if she is botherede about earlier, and reminds that her vermillion has always saved him, and now their destinies are intertwined and they shall protect each other, as their dreams shall materialise. she however is scared of that itself. he shushes her down, and takes her, while she is boggled, where is he taking her. he holds her hands, and takes her to the house that they had made together, when they were kids, and had a fight as to who shall cook food.

They reminiesce about that childhood memory, and get emotional as they eye every detail of it, saying that its exactly as they had left it. he asks if she realises what this meas, and says that this is a witness to their love, and that no troubles can affect their love which cant weaken ever, and not just that, their fights shall be immortal too. she smiles and cheers up. he points that there is a beautiful dream in this house, and thats to stay together always, and that shall be fulfilled tomorrow.

He says that she wants, when they start afresh tomorrow, it shouldnt be with tears. he then leaves, and comes back with water bottle, which is empty, and asks her to voice out all of her concerns and troubles, inside the bottle. she is boggled and complies, when he insists. he closes the bottle, and then throws it away, saying that her pains and sadness is gone and they shall never come back. she hugs him overwhelmingly, and he says that tomorrow, she should start it afresh, with all happiness and cheer, forgetting the past. he makes her extends her hands, and invites all happiness right into their lives.

Vasudha is reminiscient of how childishly innocent ganga was when she was becoming a child bride. she is emotionally overwhelmed, as she sees the older ganga dressed as a bride, in the ashram. she asks ganga if she is sad that she brought her here to dress up. ganga denies, saying that this is her maayka. vasudha blesses her to be happy always and that no troubles ever loom over them. they both hug each other.

Sagar has a hard time warding off ladies, who try to put a black teeka on him, as a part of ritual. they are insistent, while he is vehemently against it. ammaji comes to his rescue and takes him away, saying that she shall help him get ready. he is relieved. madhvi asks supriya to find the chance to do it sometime. she complies. while going out, Madhvi almost collides into prabha who gives the excuse that she had gone to collect paan leaves, for the next ritual.

Madhvi smiles. prabha’s hand slips and a packet falls on the ground. madhvi eyes it boggled, and asks whats it. madhvi asks whats this. she says that its paan masala, and says that she shall keep it in the kitchen. Madhvi complies and leaves. prabha rushes to the kitchen.

In the kitchen, she fumes that her son is rotting in jail, and they are celebrating, and if they arent happy, then she wouldnt allow sagar and his family to be happy too. she thinks about the love stories that have gone unfinished. Prabha mutters that sagar and ganga shall never unite, and that their love shall be immortal. she prepares paan, and then sprays poison into sagar and ganga’s paan, ensuring their death.

Meanwhile, Ganga happily gets ready and eyes her jewellery, remembering her excitement when she was a bride in childhood. One widow comes and gives ganga the Poison laced paan, saying that its from her groom. after they leave, she remembers sagar buying her paan in childhood, while she eyes it, and then they both eating it, while she has trouble eating it together. they both eye each other’s funny faces. Meanwhile, supriya too gives the paan to sagar, saying that its from ganga, who himself is lost in the same memory. they both eye it overwhelmingly. Prabha watcehs from a distance, in anticipation, as to the moment when sagar takes it.

Sagar and ganga oblivously consume the paan, while prabha watches sagar amusedly from a distance. Prabha thinks that they have no idea that their paan is poisoned, and they shall die before they can marry, and no one shall doubt them at all, and people shall say that sagar had to pay the price of being married to a widow.

Supriya watches sagar amusedly, as he is getting ready, while others giggle. the ladies leave, while sagar finds ganga as a child widow, coming upto him, and guffawing loudly.

While, Ganga is ready, when sudha comes and excitedly tells her that its time for her to leave, as the palenquin is ready. she happily complies, as she remembers ganga’s plight when she became a widow. she gets emotional and says that this is the first time, this is happening, as all the torturous woman have stepped in, but for the first time, a palenquin is leaving the ashram, and that too her ganga’s. she is overwhelmed, and blessing her to be happy, she hugs her, and takes her out. ganga makes her journey till the gate with the widows, emotional and reminiscient of her widow days spent here.

Ganga then sees sagar in his childhood days, as they remember their entire journey of romance since childhood. she finally sits in the palenquin as it takes off, while sagar has ganga’s hand held all the while. Then they drive off. she starts getting a dizzy spell. Meanwhile, the young ganga too takes sagar’s hand, and leads him out into the balcony, and points towards their house, which contains innumerable memories of theirs since childhood.

She then points out that ganga’s palenquin has arrived, supriya and others rush out, asking him to be ready when the priest calls him down. he silently complies. Ganga steps out of the palenquin, looking pretty as a picture, dressed as a bride. a widow asks why is she sweating so much. she says that its all okay, and she is fine. Prabha comments to ammaji about her beauty. sagar’s family stands happily, eager to welcome her in. suddenly, she sways and they all rush to her.

Ganga says that she is fine, merely some tension and groggy feeling. the widow says that its merely pre wedding jitters and nervousness. madhvi asks maharaj to get water for ganga. they do the tilak and then welcome her in. Inside, guests say tat the bride seems ill. the priest beckons for sagar, and he steps down with the guys. ganga looks upto see him, as they both have eyes only for each other. they both are made to stand together. he compliments her. she blushes. he too gets groggy.

They both take their position at the aisle. the priest asks for the jaimala to start. all watch as the ritual starts amidst chants. ganga tries to do, but is pulled back by supriya. sagar helps ganga do it, and then does so himself. both smile at each other. they are then made to sit down, while prabha is boggled. then for th gadhbandha, when arises a question as to who shall do, ammaji asks one of the widows to do it, who is overwhelmed to do it. after the gadhbandhan, the riatuls continue, while ganga starts getting dizzy yet again.

Sagar asks if she is fine. she complied. then its time for kanyadaan. the priest says that if there isnt any father, then anyone fatherly can do so. sagar and madhvi turn to his father, but he stoically refuses. madhvi asks him, and he says that he is the father of the groom, and instead asks maharaj to do so. he is highly overwhelmed at this honour. ganga too enphatically asks him. he then complies and the ritual is completed.

Gangaa gets dizzy headed yet again, as the priest asks the pheras to start. he then helps her get up, and the pheras start, whil prabha thinks that soon the poison starts working on them, and she shall see how this marriage culminates. she starts getting nauseous, as the pheras continue, and she feels groggy. next its the bride’s turn to come ahead, for the remaining rituals.

Gangaa 3 December 2020 Update – Ganga complies groggily, and she has difficulty walking ahead. Finally, falls on the ground, unconscious. they are all shocked and aghast, while prabha smiles evilly. all rush to her care, attending to her.